Posted on August 14, 2011 by edmooneyphotography 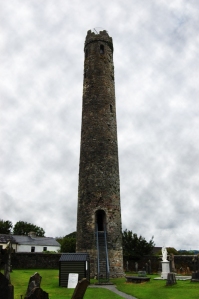 Next on the agenda was a visit to the round tower, located on the rear grounds of the Cathedral. The original tower possibly 6th century succumbed to assault or simply fell into ruin. At any rate its present rebuilding is said to date from the 12th century. The tower, built of sandstone and granite, is 108 feet high and the second highest in Ireland but it is the highest one that can be climbed. Entry to the tower costs €4 for adults and €2 for kids. 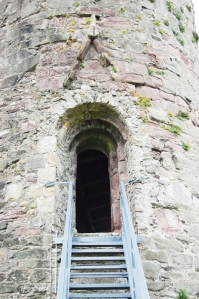 So off we went, Ryan leading the way up the stairs to the tower entrance. The doorway faces SSE; a little over 4.5 meters above the ground level there are several prominent features to be seen in the Kildare tower. The traditional conical cap has been replaced by castellations dating from approx 1730’s. 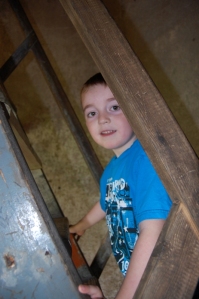 Immediately obvious is the beautifully finished and coursed granite in the lowest 3 meters of the tower, contrasting with the less evenly coursed and smaller local limestone of which the remainder of the tower is composed. The Romanesque doorway is of dark red sandstone in four receding orders, the innermost being the only to survive intact. It is carved with chevrons, lozenges and stylized marigolds. Set into the stonework above the doorway is a very weathered stone hood moulding composed of the same red sandstone. 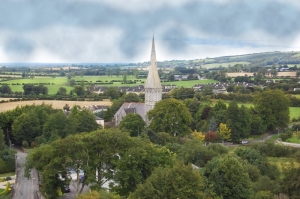 Veiw of White Abbey from top

After climbing eight or nine sets of ladders we reached the top to a spectacular view of the town and surrounding country side, the first noticeable site after looking down on the Cathedral itself is the ‘White Abbey’, which I hope to revisit soon. Getting up was far more easy than the descent, but it’s defiantly worth the struggle for the amazing view. 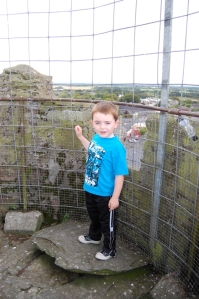 Ryan at the top

Most History books would lead us to believe that the Round Towers of Ireland were used to hide from invading Vikings etc, however similar to the many remaining standing stones which can be seen scattered around the country, the Round Towers where actualy built ontop of places of natural energy (Vortex) points. My Friend Con recently explained this to me as ”think of the towers as designer standing stones which are basic earth energy acupuncture needles,’ 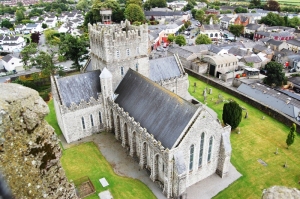 Con Connor is the main teacher at Druidschool. He is the Ard Draoi leis an Doire Geallach Doracha (Arch Druid with the Dark Moon Grove) and a member of the Tribann Council of Ord na Drui, he is known as his High Venerated Serenity SSTV /I\ Con Connor in the World Druid Order (http://oda.chez-alice.fr/doc1eng.htm), and he is also a member of the Holy Council of Sages of Celtia. Con is a member of ‘Ga agus Claoimh’ – an Irish and Viking age re-enactment group and a member of The Irish Society of Diviners. You can find out more about Con and Druidscool Ireland at http://www.druidschool.com/

7 Responses to Kildare Round Tower Part 5