Posted on September 6, 2011 by edmooneyphotography 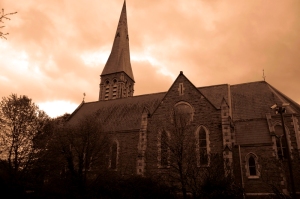 Founded in 1292 by William De Vesci Lord of Kildare. The current church dates back to 1887 and became known as the White Abbey because of the color of the Carmelites habits. There are no remains of the earlier structures which occupied the site. This same de Vesci also established the Franciscans in the Grey Abbey and built the original castle of Kildare. With the suppression of the monasteries under Henry VIII, White Abbey was surrendered on the 3rd of April, 1539. The Friars, however, continued to minister clandestinely to the people of the area during the next two centuries.

After the Penal Laws were relaxed in the 1750s the Carmelites returned to Kildare and erected a church and a school close to or on the original grounds of the 1290 foundation. This eighteenth century church served the Carmelites and the people in the district for more than one hundred years.

The foundation stone of the present church was laid on the 8th of December, 1884. The architect was William Hague who designed churches in the Pugin style. The church is therefore gothic in design and the builder was John Harris of Monasterevin, who used Wicklow granite and local stone from Boston, Rathangan. 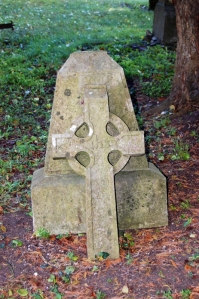 The church is cruciform in plan with the nave being set off with alternating window and arched roof-truss. The transepts are defined bypolished granite pillars with moulded bases and carved caps which support arches in line with the walls of the nave. The side chapels are seen from the transepts and chancel through arches springing from moulded piers which also support the large chancel arch with its polished granite corbel shafts, moulded bases and carved caps.

The principal entrance doorway faces east with pillared jambs, carved tympanum and moulded arches set in a projecting porch. The tower, with its lantern belfry, extends above the level of the nave roof. It has deeply recessed windows on each face and is finished with a moulded cornice. From this point the tapering spire rises to a height of 140 feet and is surmounted by a cross.

On the north transept wall of the church are inserted – for safe keeping – some interesting fifteenth/sixteenth century stonesculptures which came from the ruins of the Franciscan Grey Abbey. They are similar to the carvings from Great Connell and Dunfierth, also in Co Kildare, and probably came from the same workshop. 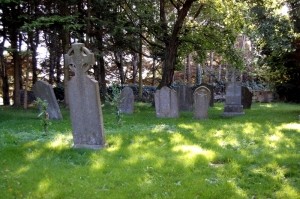 The stained glass in the church includes scenes from the lives of Our Lord and the Blessed Virgin Mary, from the Scapular Vision, as well as Saints Patrick and Brigid, and the four Evangelists. The rose window over the main entrance is of special interest with its centre piece being the Prophet Elijah, the spiritual founder of the Order. The surrounding panels show St Telesphorus, St Dionysius, St Albert (Patriarch of Jerusalem), St Andrew Corsini, St Cyril of Alexandria, St Louis IX, St Angelus, and St Albert of Sicily.

The Carmelites of the White Abbey celebrated their 7th centenary in 1990.