Posted on November 15, 2011 by edmooneyphotography

The last of the Kildare Town Abbeys I recently visited was Grey Abbey, situated to the south of the town. The site can be accessed from either the Kildare Village outlet boardwalk or from the graveyard side on the Grey Abbey road adjacent the new Aldi store. Although in a sad state of disrepair, (the remaining Abbey structure is crumbling, with the south wall being supported with a number of trusts and has now been fenced of for safety). The abbey is alleged to have been built by Lord William De Vesci for the Franciscan Friars around 1254 and rumored to have been later completed by Gerald Fitz Maurice, Lord Offaly, for the Franciscan monks. Let again it appears that the abbey got its name from the color of the habits worn by the Franciscan monks.  De Vesci later went on to construct White Abbey for the Carmalite order in 1292. It is believed that at least four Earls of Kildare are buried in the graveyard here.

The friary was considerably extended in 1350 under the patronage of Joan de Burgo. In 1539 it was suppressed and was completely abandoned by 1547. The abbey is known to have been composed of a complex of buildings including a church, a belfry, a dormitory, a hall, three chambers, a kitchen and an expansive cemetery. 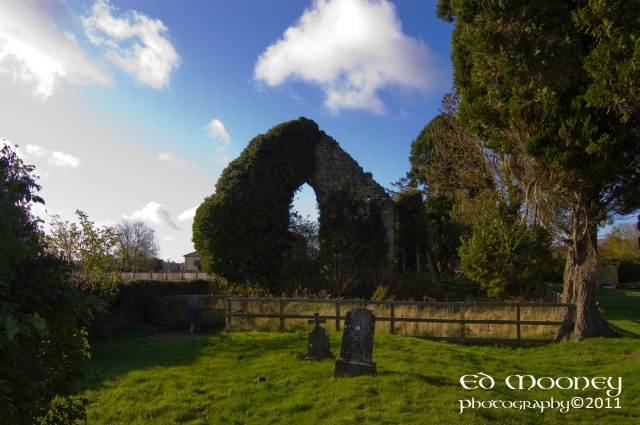