Posted on June 6, 2012 by edmooneyphotography 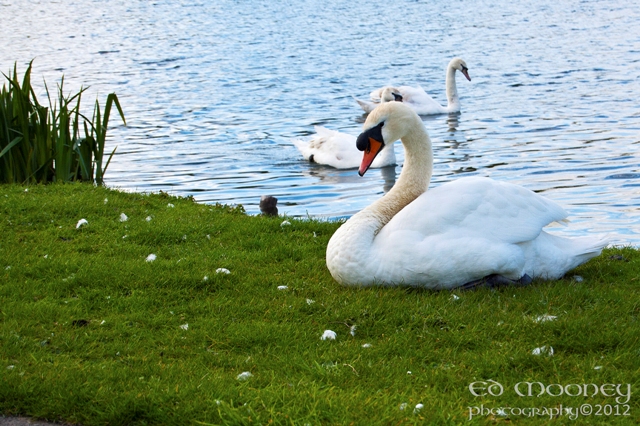 I took these images up in Ballymount park a few weeks ago, yes that’s how far my backlog of images to work through goes. But its a small price to pay for having my camera with me at all times. It was getting late in the evening when i took these.The main species of swan in Ireland is the mute swan, which remains there all the year round. While it is a shy bird, it will, if it feels threatened, attack with beak and wings, and a blow from a swan’s wing has been known to break a man’s arm. There are two other species of swan which can be found in Ireland, the whooper swan and the Bewick’s swan, both of which only visit the islands in the winter.

I always found swans to have a majestic presence and Gaelic mythology is filled with great stories linked to them. Swans normally tend to mate for life and are known to be extremely loyal. One of the oldest laws still in existence dates back to the old Brehon laws were it was a crime to murder a swan. The most famous swans in Celtic mythology are the Children of Lir.

”Bodh Dearg was elected King of the Tuatha De Dannan much to the chagrin of Lir, his main rival. To appease him, Bodh Dearg sent him one of his daughters, Aoibh, to take as his wife. She bore him four children, a girl named Fionnula and three sons Aodh, Fiachra and Conn. Aiobh died, so Bodh Dearg sent another of his daughters, Aoife to marry Lir. Aoife soon became jealous of the love that Lir had for his four children so she decided to banish them. She turned them into swans, when Bodh heard of this he transformed Aoife into an air demon for eternity. The children, as swans were forced to spend three hundred years on Lough Derravaragh, Co. Westmeath; three hundred years on the Sea of Moyle, lying between Co. Antrim and the Mull of Kintyre in Scotland and three hundred years on Inis Gluaire, off the coast of Co. Mayo. After nine hundred years they eventually were granted sanctuary on Inis Gluaire by a monk named MacCaomhog. The children were tied together with silver chains to ensure that they would always stay together. However, Deoch the wife of the King of Leinster Lairgean demanded that she wanted the swans. Lairgean attacked the monastery on Inis Gluaire, however during the raid, the chains were broken and the swans transformed into old, withered people, before they died they each were baptised. According to some accounts the site of Lir’s castle is currently occupied by Tullynally Castle, Co. Westmeath, home of the Earl of Longford, Tullynally is the anglicised form of Tullach na n-eala or ‘hill of the swan”.

Photographer, Blogger, Ruinhunter, with an unhealthy obsession for history, mythology and the arcane.
View all posts by edmooneyphotography →
This entry was posted in Animals, Nature, Photography and tagged Brehon law, Children of Lir, Mythology, swans. Bookmark the permalink.