Posted on May 23, 2013 by edmooneyphotography 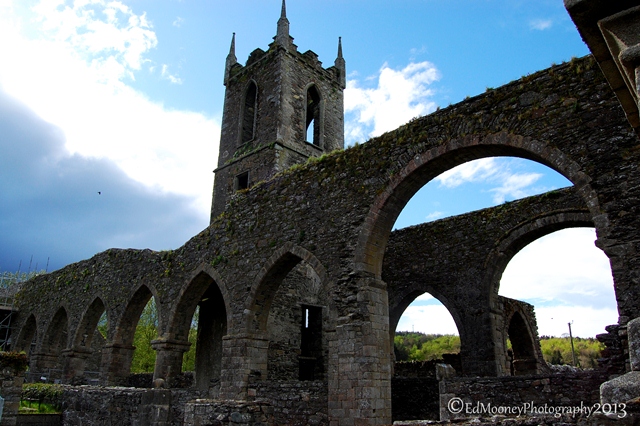 This Abbey is one of my personal favourite sites to visit. Last week I found myself urged to make the drive down the N81 through Blessington to the small town of Baltinglass in Wicklow to explore the Abbey. Baltinglass was historically known in Irish as Bealach Conglais, meaning “Road of Cúglas”.  Conglas was a member of the legendary warrior army, the Fianna led by Fionn MacCumhaill.  It has been about ten years since my last visit here and it still holds the peaceful atmosphere that I remember. Built around a bridge crossing the river Slaney it was in Baltinglass in 1148AD that the then King of Leinster Diarmuid Mac Murchada, founded the Abbey on the east bank of the River Slaney for a group of Cistercian monks from the Abbey of Mellifont in Co. Louth. He called this monastic settlement “The Valley of Salvation”. In 1228 it is recorded that there were 36 monks and 50 lay brothers living there. The monastery would once have had a whole range of domestic buildings in which the monks would have lived and worked. Sadly little remains of this with the exception of the church.  For those whom don’t know, good old Diarmuid was the idiot responsible for the Norman invasion and subsequent foreign occupation of Ireland for many centuries.

The Abbey is said to have been completed by 1170AD, the year before Mac Murchada’s death and the assumption of the Lordship of Leinster by the Anglo-Norman Richard de Clare, Earl of Pembroke or Strongbow as he is commonly known. After its dissolution in 1537 Baltinglass was one of the richest Abbeys in Ireland and held lands throughout the region. The ruins of this Abbey consist of a nave with ails and chancel church with two transepts. There are six stunning Gothic Arches beside the nave. When I arrived here, a part of the Abbey had been fenced off for renovation works, but the remainder can be accessed through the grounds of the St Mary’s Anglican Church on the same grounds. The oldest part of the abbey, built in the 1150s, is the east end of the church which has a square presbytery and a pair of transepts from which small chapel’s project. The church nave was built in the 1160s. The east windows and tower were added at some stage in the nineteenth century. 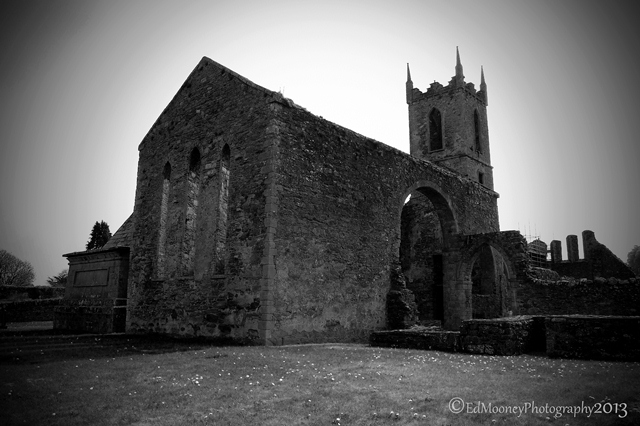 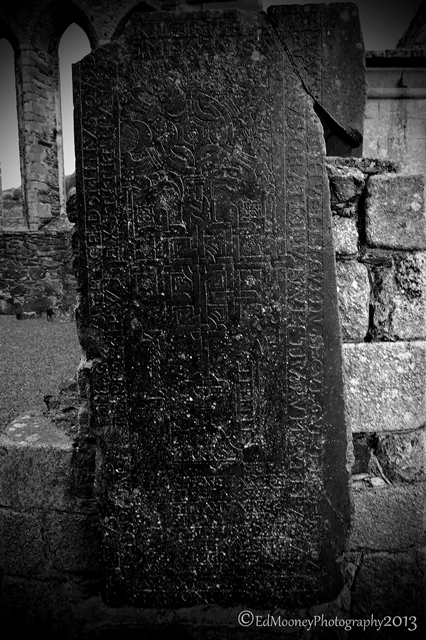 The south aisle of the church is joined to the choir by a twelfth century doorway. Part of the original cloister, to the south of the church, has been clearly rebuilt. The church also has some thirteenth and fifteenth century additions. The church is considered to be a good example of Irish Romanesque architecture. The church has carved human and animals figures and the church nave has alternating cylindrical and square piers and the bases are decorated with a range of Irish Romanesque designs. The three west windows are 12th century, but the three east windows and tower (now housing carved fragments and some medieval tiles from the Abbey) are 19th century. Joining the south aisle to the cloister is a 12th century doorway, while excavations in 1931 brought to light a north door in the aisle, parts of the original cloister (now rebuild) and an early tower which blocked the eastern two – thirds of the transept arches. The decorative stonework at Baltinglass shows an interesting fusion of Cistercian and Irish Romanesque architecture. 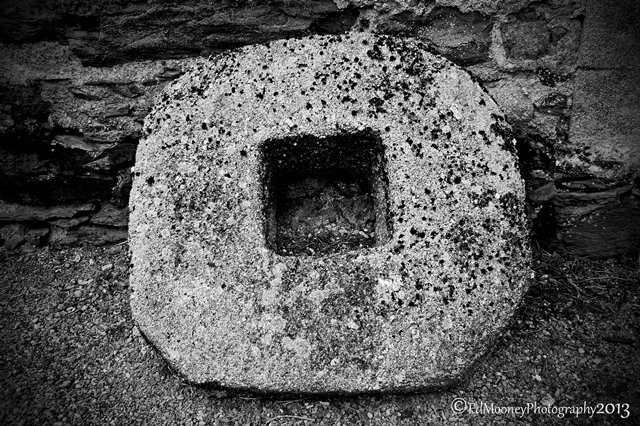 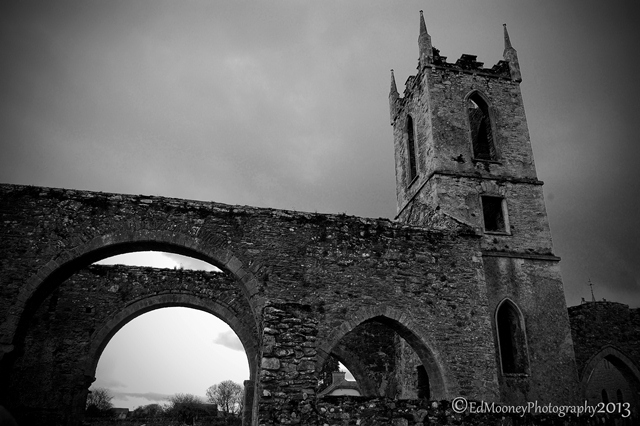 The church is considered to be one of the finest examples of Romanesque architecture in Ireland. It also contains a rich array of carvings, including some with animals and human figures. The north-east crossing pier is decorated with lion and foliage ornaments, while a bronze crucifix in the Romanesque style also survives. The nave of the church is aisled with alternating cylindrical and square piers, which are of English origin, the bases of which are decorated with a range of unusual designs. These are said to have been crafted by the so-called “˜Baltinglass Master’ who worked on the abbey at Jerpoint. A series of tiles have also been discovered at the site; one design depicts a warrior thrusting forward with a circular shield. This tile could not be seen on this visit and has either been covered up as part of the restoration works of has been removed. Hopefully it is still there and I shall return once the works have been completed to investigate further. Another Tile of interest is the wonderfully ornate Grace Stone. The stone is presently set in an upright position, but originally it would have formed the flat top of a chest or altar tomb. The stone commemorates a James Grace who lived in nearby Rathvilly (Co. Carlow) and who died in 1605. 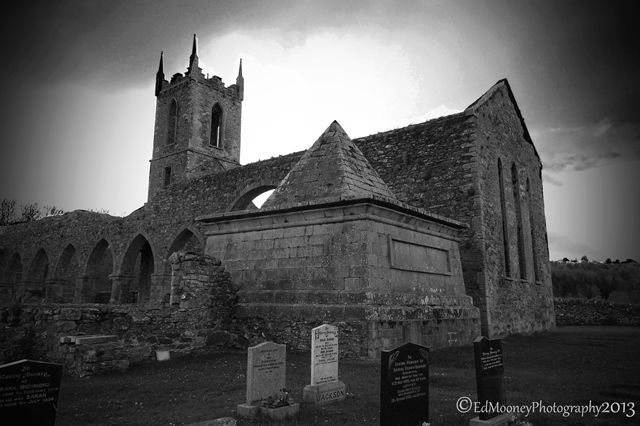 At this time the former Cistercian monks of the abbey had long been evicted from the site following the suppression of the abbey in 1536. However, the abbey church continued to be used as a place of worship for some time after, and the surrounding graveyard continued to be used throughout this period, right up to the present day. The Grace memorial stone features a centrally placed cross composed of broad interlace strap work. Above this is a floral pattern, perhaps intended as a decorative sun burst, comprising a central Tudor Rose and five rays, each with a fleur-de-lis terminal. The stem below the cross terminates in a small base that frames an IHS. At various points around the cross are a wide range of Symbols of the Passion, including the cock on the pot, crown of thorns, the moon and sun, the hammer, two flails, the pincer with three nails, the pillar and two ropes, Peter’s sword, three dice, thirty pieces of silver, a ladder, the spear and the sponge. 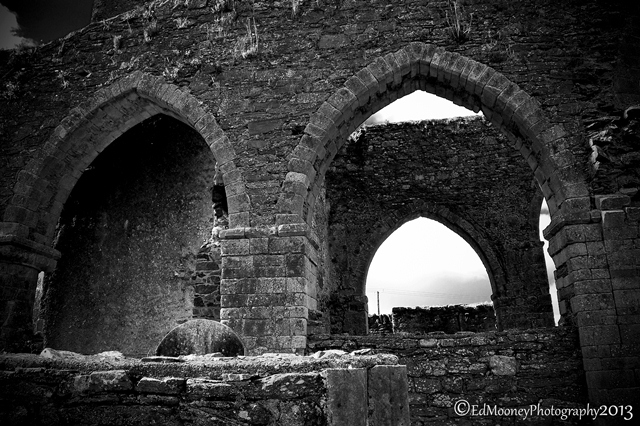 The inscription around the edge of the stone is in Latin and when translated into English reads “Here lies that noble and illustrious man, James Grace, formerly of Killerige, an inhabitant Rathvilly, who, when living in the world, was both courageous in war and distinguished in hospitality; but now, being taken from among the living, he craves, of your charity, the support of your prayers. He died truly full of days, in the year of Our Lord’s Incarnation 1605 on the 23rd day of February, in the 68th year of his age. May he rest in peace.” 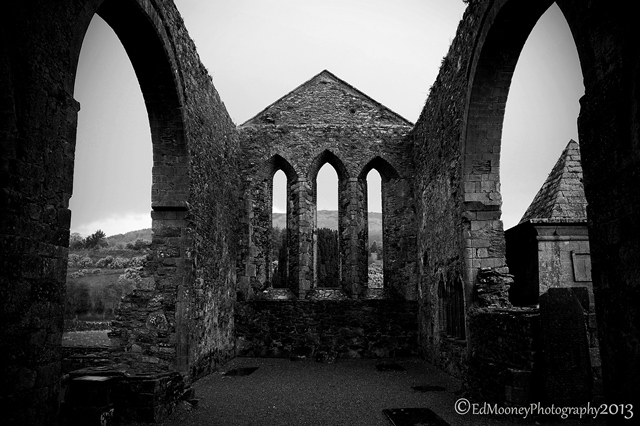 Adjoining the abbey is a great pyramid-style granite mausoleum, built in 1832 as a tomb for the Stratford family. I guess the reason why I like this site so much is that despite its Christian history it is bursting with great energy and it has a great peace to it. My last trip here some years ago was with the now defunct Heritage awareness group where I was first introduced to dousing. In the hour or so I spent reacquainting myself I came up against an old nemeses, one of a ruin hunters biggest enemies ‘Rain’ Not only was I attacked by numerous brief rain showers but an added bout of hail stones. Luckily enough part of the Abbey walls offered me and my camera shelter from the onslaught. Baltinglass is truly a magnificent site filled with history, good vibes and a great place to get shooting. If you ever are in the area I would highly recommend taking an hour or so to experience all that it has to offer. 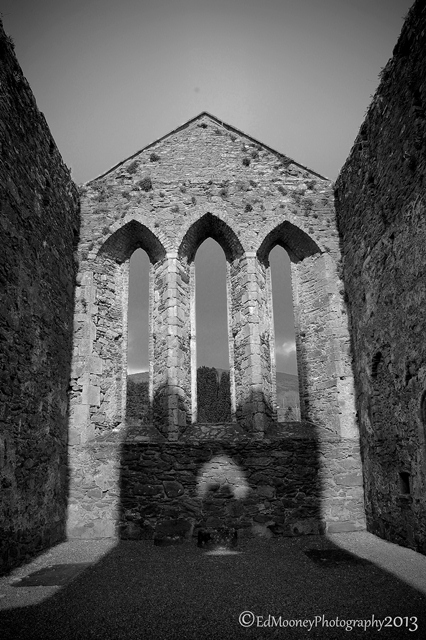