Posted on July 2, 2013 by edmooneyphotography 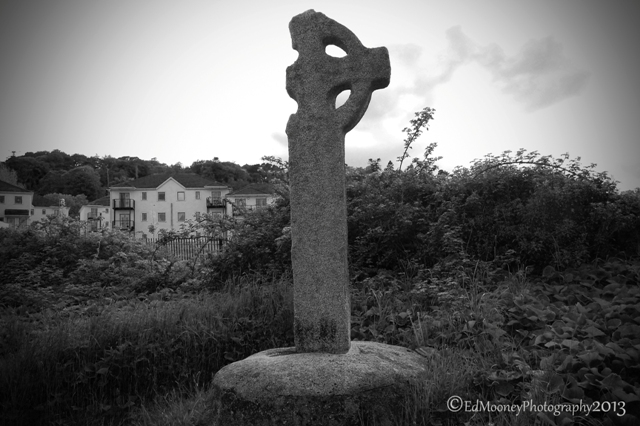 Right beside the mound on which Kilgobbin church sits there is a very nice but weathered and damaged Celtic High Cross. As mentioned in my previous post about the church ruins at Kilgobbin in the early 1800s a three-armed Celtic high cross was found under the soil during extension work of the existing graveyard. The Cross which is a National Monument is believed to date from the 10th century. There was a protective fence which surrounded the Cross some years ago but this has completely disappeared now. The Cross stands over eight feet in height and was made from granite. The cross was set into what appears to be a much older Bullaun Stone with cement. Bullaun  stones are commonly associated with Christian sites but may possibly be from an earlier time.

A bullaun stone is a rock with a round cup in it. They were probably used as a mortar for grinding herbs for potions, or grain for ceremonial bread, and for liquid offerings, such as milk or holy water. They are also associated with prayer/cursing stones. A round stone was rolled around in the bullaun while a prayer or curse was being invoked. This ritual may well derive from the use of a round stone as a pestle in the bullaun mortar. Local folklore often attaches religious or magical significance these bowl shaped stones, such as the belief that the rainwater collecting in a stone’s hollow has healing properties. Kilgobbin is believed to have been named after the 6th century saint Gobban. He was reputedly the master architect of churches in Ireland at the time. Sadly the southern arm and adjoining ring has been broken. This cross may well have been erected around the time of the Battle of Clontarf.