Posted on August 1, 2013 by edmooneyphotography

I came across this Megalithic Tomb by complete accident whilst researching something else. However finding the darn thing was a different matter. As usual I now go out armed with all site co-ordinates uploaded to my GPS, but the location I entered from the satellite imagery was incorrect and I had to locate the tomb the old fashioned way. I eventually narrowed my search down to a hill to the rear of St. Mary’s Hospital. There is a heritage signpost on the main road adjacent the hill but it gives a false impression as to the true location. The Park is home to many monuments of interest but I shall address these at another time.

Cromlech is a Brythonic word (Breton/Cornish/Welsh) used to describe prehistoric megalithic structures, where crom means “bent” or “curved” and llech means “slab” or “flagstone”. The term is now virtually obsolete in archaeology, but remains in use as a colloquial term for two different types of megalithic monument. In English it usually refers to dolmens, the remains of prehistoric stone chamber tombs. The Cromlech is obviously a megalithic tomb and dates from about 2500 to 1700 BC. This would make it older than the passage grave in the Boyne Valley. It appears to be the oldest such tomb that I have to date encountered in Dublin and it is probably the smallest of its kind in the country.

The Cromlech at Knockmaroon takes its name from the Gaelic “Cnoc-Maraidhe” and is also known as ‘Knockmaridhe’, ‘Knockmary Dolmen’ & ‘Cnoc-Maraidhe’ or ‘Hill of the Mariners’. It was discovered in 1838 by workmen whom were removing an ancient Tumulus. Excavation of the mound, revealed a central cist consisting of five upright stones supporting the large capstone.  The cromlech is the only element of the mound which survives today. It is said to have contained the remains of at least three individuals all male, one of which was incomplete.  Also found within the burial were a shell necklace, a bone toggle and a flint blade.  A Captain Larcom of the Royal Engineers was credited with stopping the work in order for the Royal Academy to study the find.

Despite its relative seclusion within the park the top slab of the tomb has visible cracks, on the surface with signs of attempted restoration being carried out. You can also see that a concrete pillar has been added to support the top slab. There is a reconstruction of what the burial mound would have looked like prior to its disturbance on display at the Ashtown Castle Visitors Center in the Phoenix Park. Skeletons, pottery and other such artefacts removed from the site are now in the National Museum. 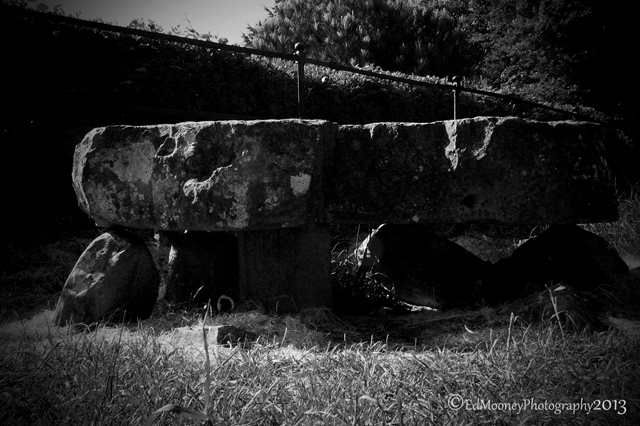