Posted on August 19, 2013 by edmooneyphotography 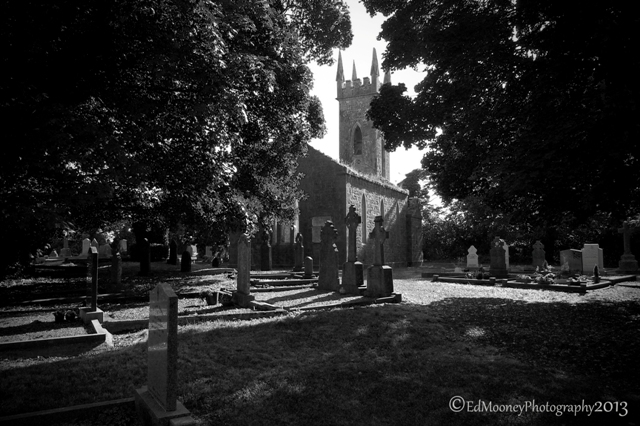 This post has been almost a year in the making. I first went looking for the church after I received a mail from Tom who runs the fantastic site The Standing Stone. It has been an inspiration to me over the last two years and is the main culprit for the direction my photography has taken. So if you are interested in the historical sites of Ireland, then I would highly recommend a visit. So as it turns out Lackagh is only a stone’s throw (excuse the pun)  from where I live. It was easy to find, but that’s where things got difficult. It is near impossible to find any information either online or via my usual sources, libraries / National archives etc. After months of searching I finally hit the jackpot. A wealth of information on not just the church, but also some interesting history on the area. Many thanks to Liz Fitzpatrick of Castle View Farm for providing not just the info but her time, which without this post would never have been completed. 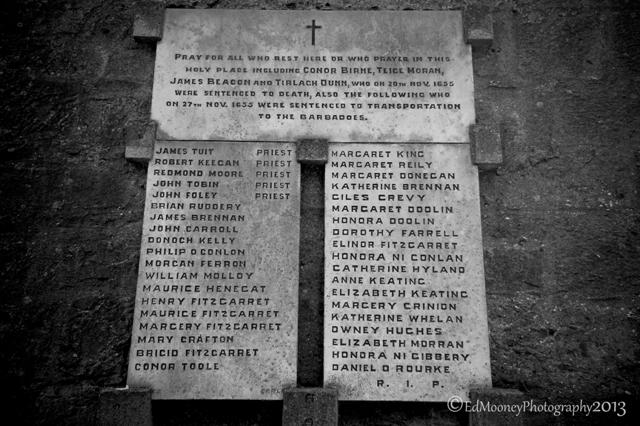 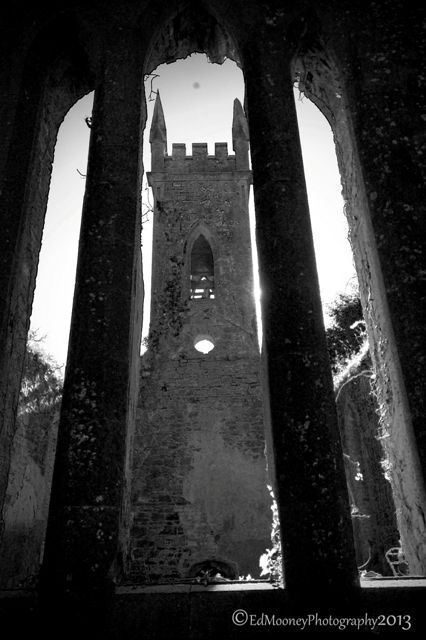 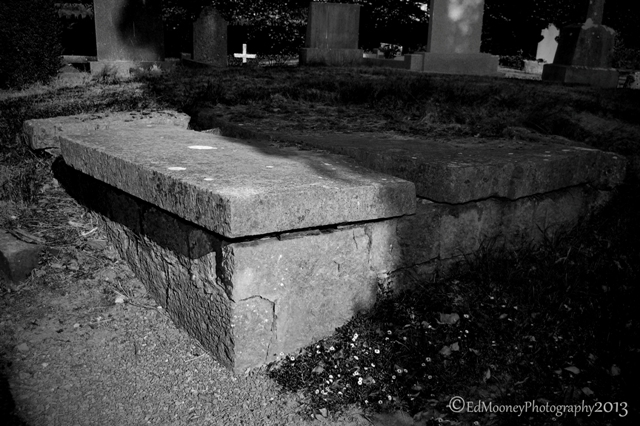 Lackagh or Leachach in its true Irish form translates to ‘ a slope or side of a hill’. It is a small rural area with a surprisingly rich history. Now this is just a shot in the dark, but the name may well derive from the large Tumulus or mound which can be seen in the nearby field. Now it is just my theory but Kildare is not known for having slopes, hills or mountains. It is a fairly flat plane and as such has become a popular county for horse breeding and racing. So I would suggest that the area took its name from the ancient mound. If anyone can correct me on this or has further details, I would love to hear from you. Also to be found in the field beside the church are the scant remains of a castle that formerly belonged to the Fitzgerald’s. The field has now become a slurry pit and all that remains of this castle is a small corner which is now completely overrun with ivy. Nearby lies MountRice, a large mansion erected by the Rice family. There is also evidence of a Ring fort, Crannog which date back to 4B.C., a Fluacht Fia and a Motte can also be found nearby. 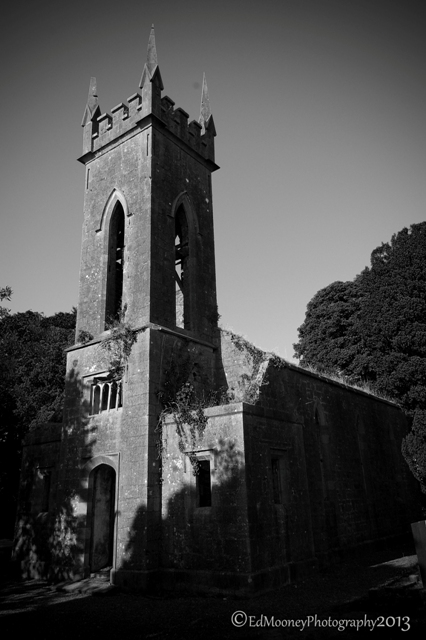 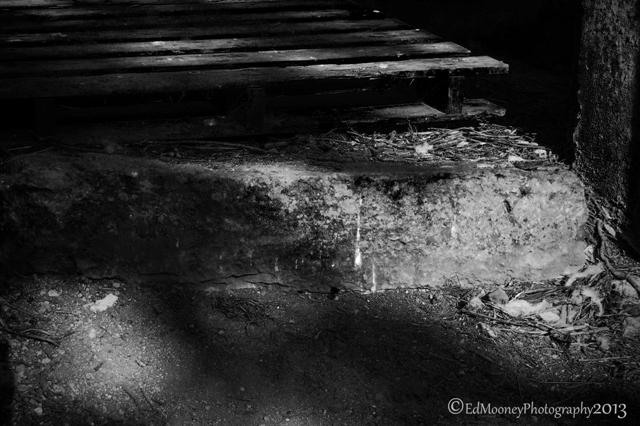 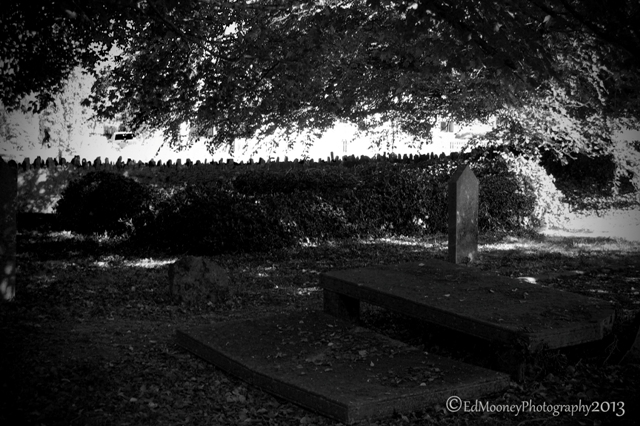 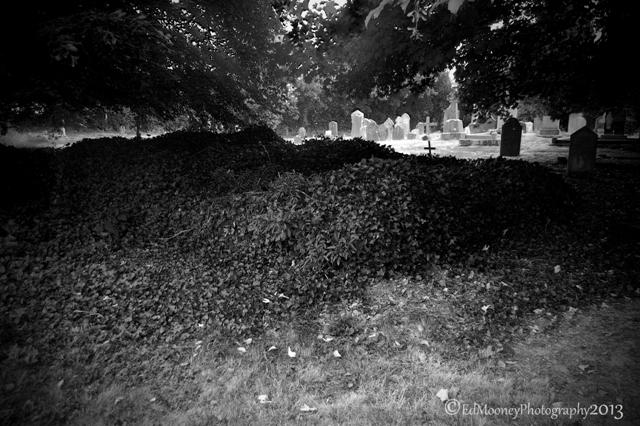 The current church and graveyard are enclosed by a stone wall with one gate in the northeast corner. To the left of the gate sits what was once the caretaker’s house. The current church ruins dates back to the1 9th century and are in decent condition, it replaced another from the late medieval period. A Catholic church once stood on these same grounds prior to this, but the only visible sign of its existence is a small mound which lies near the south wall of the current church where its foundations once stood. As you enter this picturesque site you will notice that the grave burials which surround the church mostly date from 18th to 21st century. These vary in style from Celtic, kerb set, table and recumbent tombs. There are also 20-30 iron crosses which have been laid out randomly. An interesting story regarding one such tomb is that of Lady Mountrice, who was buried in the family plot at Lackagh. Now this lady was well known for her jewels, having come from a wealthy family. So as the story goes a couple of local lads whom were up to no good decided to remove the corpse on the night of her funeral in order to relieve the deceased  Lady of her jewellery. However as one of them attempted to remove a ring from her finger the lady woke up and the shocked would be grave robbers ran away with fright. But to end on a good note, the Lady in question is said to have recovered from her ghastly ordeal and lived to a ripe old age. 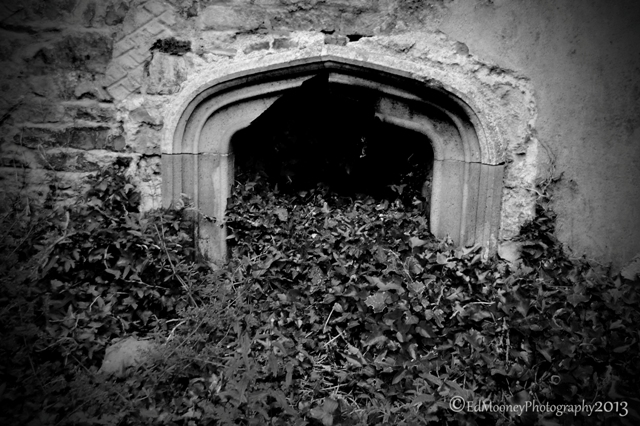 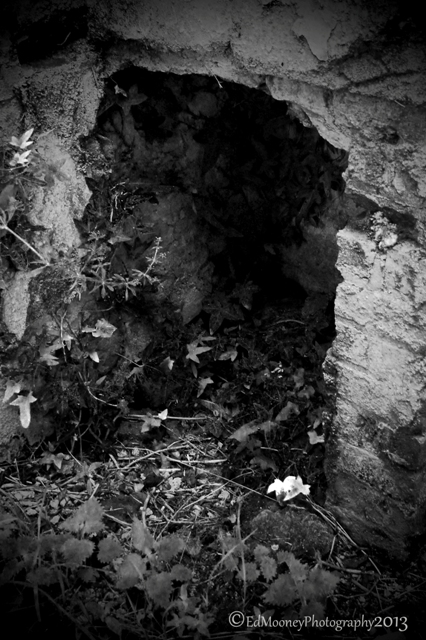 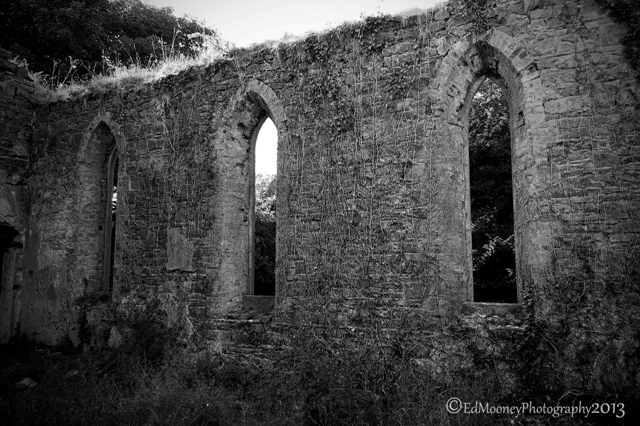 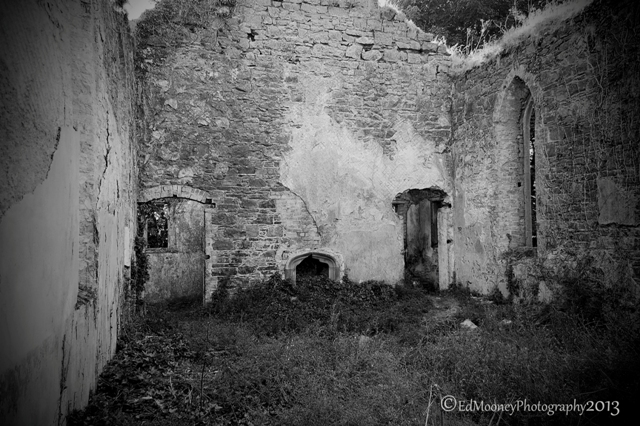 The outstanding feature of the church is its Bell tower which still contains its wooden frame and pulleys. The bell was removed many years ago. One strange feature of this tower are the two fire places which are situated in separate parts of the east wall of the tower, as there are no signs of a chimney. As you enter the church through the doorway in the bell tower you will notice a very old stone slab  which could easily be mistaken for a step or a lintel. This however is in fact the original gravestone of the last parish priest of Lackagh, Rev. Stephen Bolger whom died in 1786. How this stone got to the doorway remains a mystery but in 1947 a Celtic cross was put in place, funded by  the local residents to mark this grave. 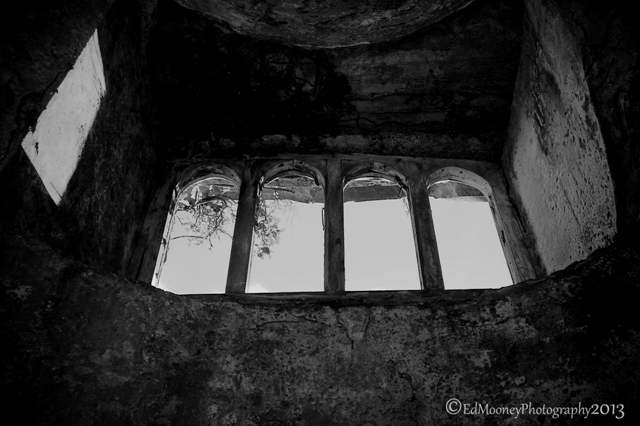 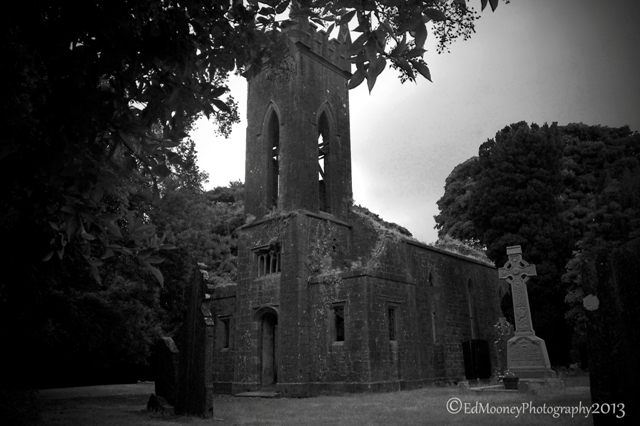 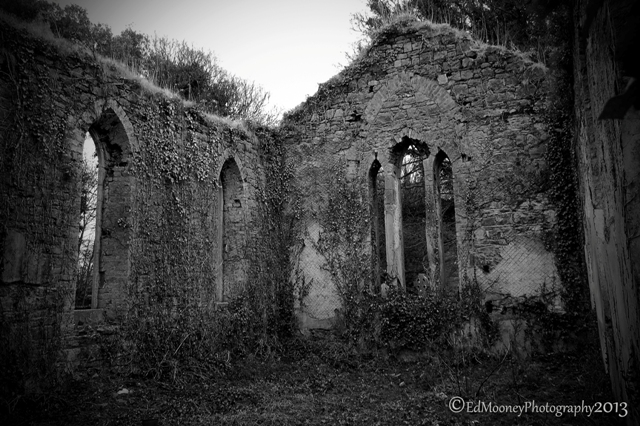 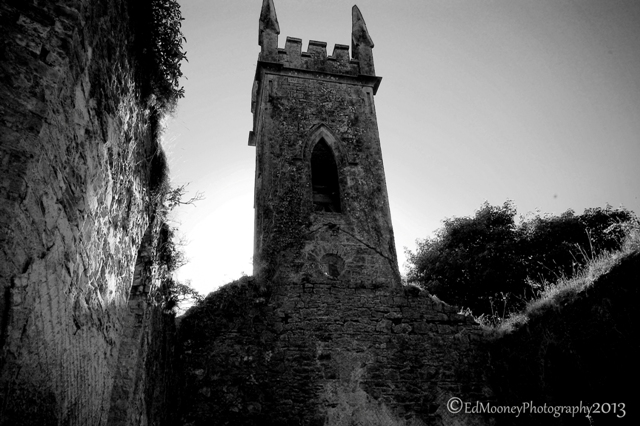 On the east wall of the church you will notice a three piece commemorative plaque. It was unveiled on 4th October 1949 on remembrance of the Lackagh exiles.  Around 1655 two British soldiers were killed in Lackagh. Despite an investigation into the matter no culprits were ever apprehended for the murder.  In retaliation for the killing the entire population of Lackagh were to be deported to  Barbados under the order of the much hated Oliver Cromwell. Unfortunately four local men were also sentenced to be hung,  drawn and quartered for the crime. This was believed to have taken place opposite the church where the men were hung from a tree until near dead. As for what happened next to these poor souls, I shall leave that to your imagination. Suffice to say that they all came to a gruesome end. The remaining population were sent to Wexford to await transport to Barbados, were they were to be sold as slaves. In fact recent studies have shown strong Irish roots amongst  the West-Indies people as a result of the many deportations of this kind. 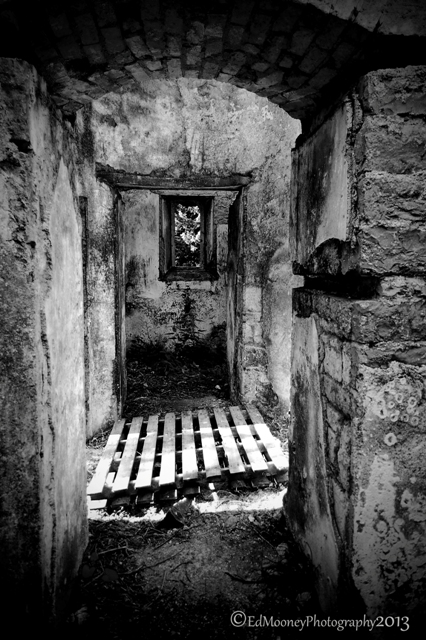 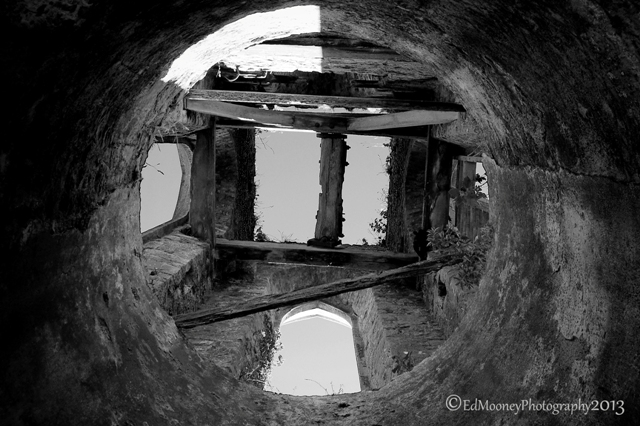 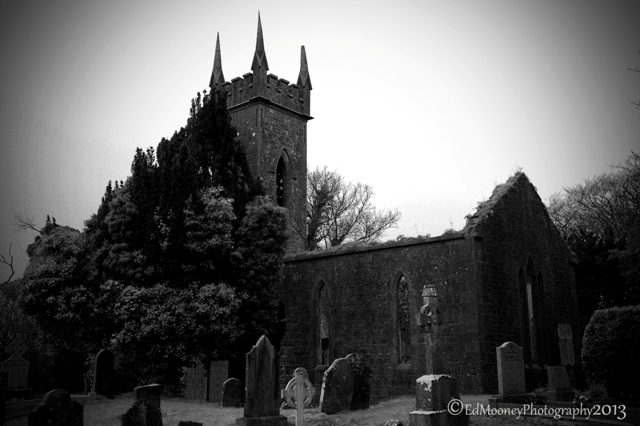 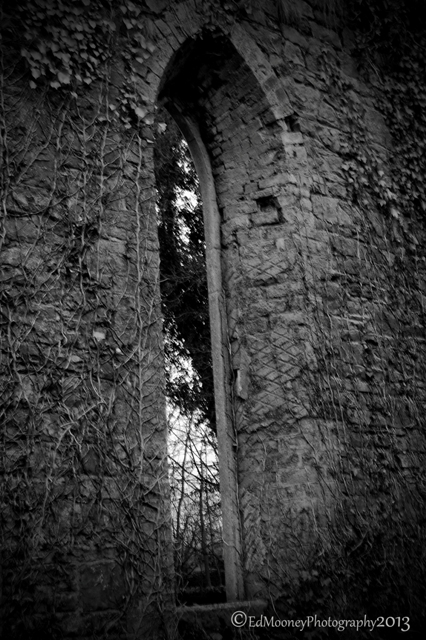 All that remains to be mentioned  about this church  are the lovely windows which surprisingly still have there lintel and window frames present. This must be a first for me. Also in the eastern section of the graveyard lies the ivy-clad remains of what was once a guard house. Similar to my previous post on Cruagh Watchtower Ireland had a problem with grave robbers mainly because cadavers were in such high demand for the medical schools of the day. The supply of bodies became a lucrative trade for those will to risk night time raids on fresh burials. I guess that the guard house at Lackagh was not in use at the time of the Mountrice incident. Finally it is said that there was an arched tunnel which led from the church to the near-by Castle at Lackagh, however this is believed to have been filled in and is now just a memory. 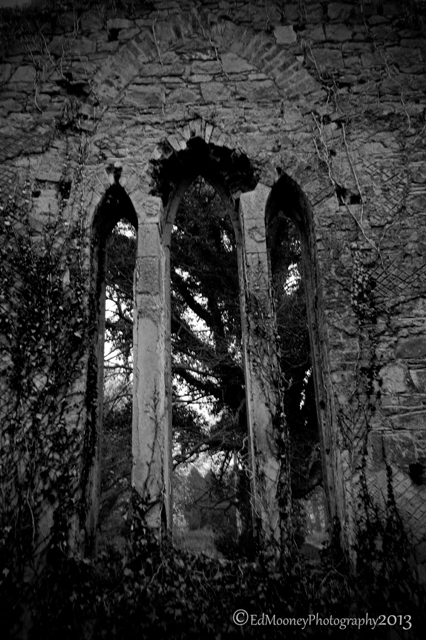