Posted on June 5, 2014 by edmooneyphotography 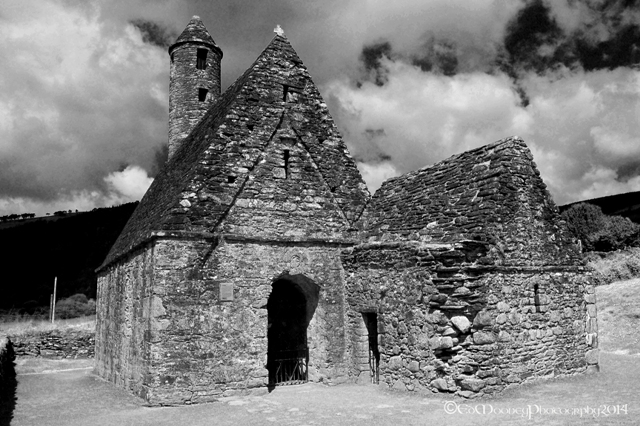 Directly adjacent St. Kierans Church we find the 12th century church of St. Kevin. It is quite remarkable in the fact that it is the only building within the Monastic City to survive with its roof intact. This church which is also known as Kevin’s Kitchen due to the rather unusual miniature Round Tower attached which acted as a belfry, and is said to resemble a kitchen chimney, however no food is believed to have ever been cooked here. The belfry tower with its conical cap and four small windows rises up from the west end of the churches stone roof and resembles its much larger neighbouring Round Tower. The tower is three stories high. The church was originally a small rectangular single-celled church consisting of a nave, with the entrance door in the west end and a small round-headed window in the east gable.  Later on a chancel and sacristy were added to the east. Only the foundations of the chancel can be seen, but the sacristy still remains. The upper part of the gable window can be seen just above what was the chancel arch. 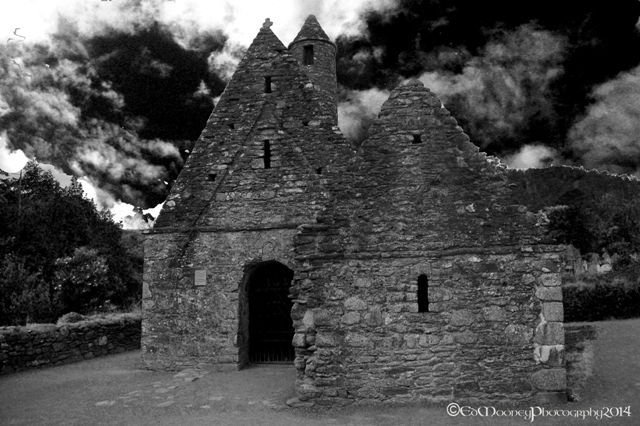 Entrance to the Nave

The fact that this is the only surviving structure with a roof intact must be that it was made of stone. Whilst many structures from the period would have been constructed using timber roofs  The steep roof was constructed using corbelled stones, similar to the one at St. Doolagh’s. Now I did not get to have a good look inside the building as it is secured with iron gates which are kept padlocked. One of the tourists approached a member of staff from the visitor center whom had just finished a tour and was told that access was restricted. So I guess unless you are willing to fork out the admission price then they wont let you have a peek inside. Apart from the Round Tower this is the only other building which you cannot enter. I did not see anyone get to climb up either the Belfry or Round Towers, which would have been the only parts that I would have been interested in seeing, so I  was not too bothered about it.

The Church roof is said to be supported by a barrel-vaulted ceiling similar to those at Oughavel in Laois and Oughterard in Kildare. It is also believed to have had a wooden upper floor with access through an opening in the west end of the vault. The doorway in the west was lintelled with inclined door jambs. There was a window in the south wall, but this is said to have been removed in around 1843. You can actually see where the gap left was bricked in. Access to the Sacristy on the north-east corner is also restricted with another iron gate and padlock. It has a simple lintelled entrance in the south wall with a small round-headed window in the east wall. As a result of this church retaining its roof a large number of artefacts were housed within its walls, perhaps this is the reason for the elevated level of security on this building alone as opposed to the other structures.

Enterance to the Sacristy

Most of these artefacts have now been transferred to the visitor center, so unless the remainder are still in situ, the padlocked gates are there to force anyone interested in seeing the inside to pay for a tour guide. As many of you will know, I always try to avoid these tours, not because I don’t want to fork out my hard-earned cash, but because I find them to be of little benefit. It would be an extremely rare occasion that I would find out important information from a tour guide that I do not already know or can find out in my research. So the only reason I might return to Glendalough and pay in to the visitors center will be to have a look at the artifacts that they have tucked away. Hopefully I will have some of my little Ruinhunters with me so I can show them around the rest of the site and follow-up on one or two sites that I think I have missed. I will let you know how that goes, in due course.