Posted on August 9, 2014 by edmooneyphotography

Having explored all the buildings that the Monastic settlement has to offer, I took a stroll through the packed graveyard, stopping off to look at a few interesting gravestones. Many graves were of military personnel dating back to the Battle of the Boyne and various rebellions in the 17th-8th centuries. It was also interesting to find that both Catholics and Protestants are buried here side by side. There were two decrepit structures in the middle of the graveyard which you could almost miss if you were not paying attention. The first was marked as The Penal Altar. To me it looked like the ruins of a chapel which had not been used in centuries. All that remains are what was once a gable wall and parts of walls. Much of what remains is hidden by various Memorials. Over the years many laws were passed by the invading Anglo-Norman/English which discriminated against the native Irish, whom were predominantly Catholic. But the year 1695 marked the beginning of some extreme Laws which included land removal and the right to practice your religion. These were known as the Penal Laws, and it was not until the 18th century when these begun to be relaxed.

During these times it was against the law for Catholics to go to Mass and priests would be regularly persecuted, so they had to practise their religion in secret or face severe punishment if caught. This penal Altar would have been a place where Mass would have been said in secret. It is believed that members of the congregation would  climb the nearby Motte to act as lookouts in case of a surprise attack.

In front of the Penal Altar is the tomb of a Rev. Daniel Kavanagh whom is associated a cure for the toothache. The story goes,  If you want to be cured you take a small amount of clay from outside the graveyard gate, then you place it underneath  the tomb and remove some clay from the same tomb. You then place it in your mouth around the affected area and walk on to the Holy Well where you wash the clay from your mouth with water from the holy well and say a short prayer to Fr. Kavanagh. Now thankfully I was not suffering from toothache at the time so I was unable to try out this tale, chances are I probably would’nt have either. But If anyone has tried it, I would love to hear how you got on 🙂 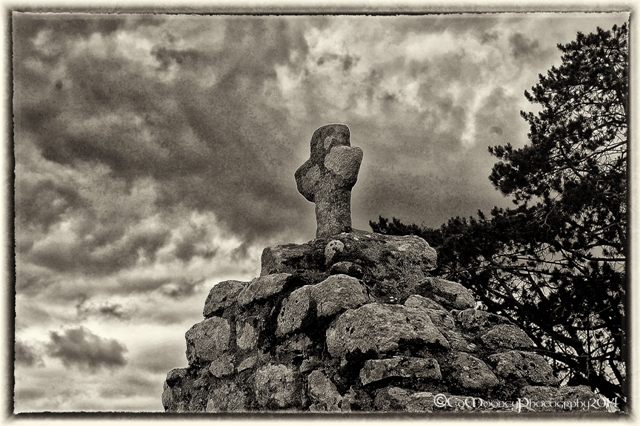 21 Responses to The Penal Altar