Posted on September 8, 2014 by edmooneyphotography

Another site I recently returned to with Ryan and Ava, my two eldest Ruinhunters was the Abbey at Aghaboe. The last time I was here would have been back in early 2011 when I was just beginning my adventure in combining both Photography and Ruin hunting. When we got here first there was some sort of tour going on inside the Abbey, so we headed down to have a look at a possible Standing Stone in a nearby Field. Aghaboe has a long history of plunder, burning and rebuilding. Which first began with its foundation as a monastery by St. Cainnech in 577AD. 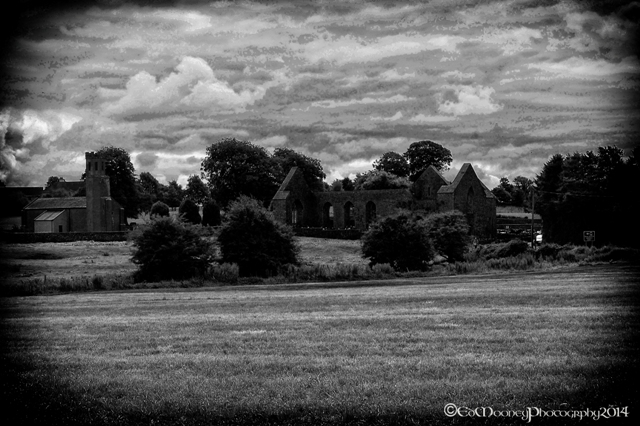 View from the nearby Motte & Bailey

This monastery was known to be a major centre of learning, commerce and agriculture in its day. Cainnech was born around 515AD in Glengiven, Cianachta, which is now part of Derry. According to the Annals of,  he died at Aghaboe in 600 AD. After his death an interesting event occurs in which the monastic community at Cill Chainnigh (modern day Kilkenny), of which he also founded wanted to take his remains to be buried in their settlement. But the Aghaboe monks were having none of it and it was believed a number of confrontations took place. As the story goes when both parties returned from prayer one day, two identical coffins were found. So one was taken back to Cill Chainnigh, whilst the other remained at Aghaboe, at least that’s how the legend is told. 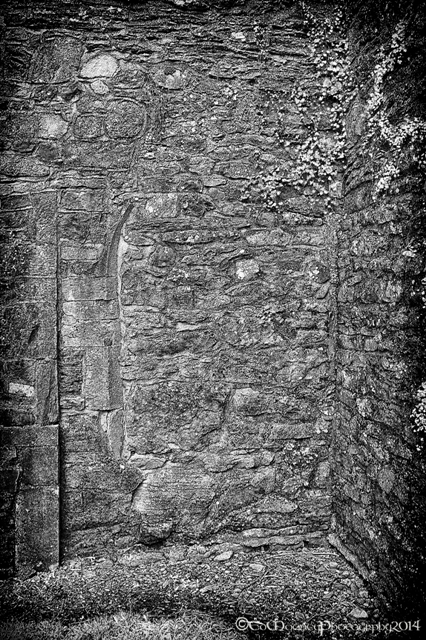 One notable resident of the Abbey, the astronomer  St. Virgilius, whom was also known as St. Feargal was Abbott of the Abbey in 739AD resigned his post here to become a missionary. About 10 years later he became the Bishop of Salzburg in Austria between (749 – 784AD). Then in 913AD Aghaboe suffered the arrival of our friendly raiders from the north. The Vikings plundered Aghaboe and presumably burnt it to the ground. In 1052 it was rebuilt with what was known as the Great Church and the relics of St. Cainnech were enshrined there.  Yet again it was burnt to the ground in 1116 by an unknown culprit only to be rebuilt in 1189. It was during this time that it served as an Augustinian priory and was the cathedral church of the diocese of Ossory, from where the High Crosses of Ahenny  and Kilkieran were said to have been crafted.

In 1172 after the arrival of Norman invaders, Richard De Clare whom was better known as Strongbow granted the lands of Aghaboe to another Norman knight, Adam De Hereford. By 1190 the See of Ossory was transferred from Aghaboe to Kilkenny, probably due to political unrest in the Laois area where the Gaelic tribes were in constant conflict with the Norman Lords whom had seized their ancestral lands by force. Tragedy was to strike Aghaboe yet again, this time in 1346 when during an attack on the Norman Castle in an adjoining field, the town and church of Aghaboe, together with the shrine containing the bones and relics of St. Canice, were burned by Dermot Mac Giolla Phádraig. 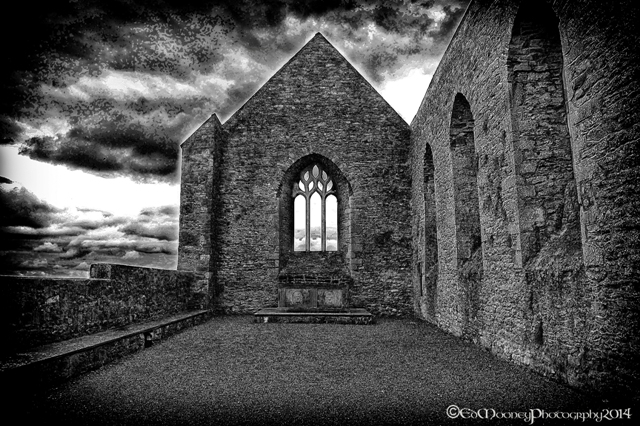 But the Castle remained in Norman hands until 1359 when the Mac Giolla Phádraig clan finally seized power from the English. By 1382 the fortunes of Aghaboe were to change for the better, when the Lord of Ossary Finghin Mac Giolla Phádraig built a friary to the west of the ruined Abbey for the Dominican Order whom were to stay in the area for almost four centuries. This was the same Finghin Mac Giolla Phádraig whom built the nearby Cullahill Castle. The friary contains a beautifully carved three-light window, which can still be seen today. In the year 1400 Phelans Chapel which is attached to the Abbey Church , on the South side was built. Then along came Henry VIII in 1540 with his suppression of the monasteries.

In 1586 a Crown lease was given to a Daniel Kelly, which contained ‘the site of the house of friars of Athbowe in Osserye, in the country of McGillaptricke, and cottages and lands in Athbowe’. Interestingly it would seem that Daniel was a soldier. Presumably in the service of the Crown. Today a Church of Ireland chapel can be seen to the rear of the Abbey which is said to date from the 1700’s  and stands where that priory once stood. Incorporated into the church are fragments of the Augustinians’ buildings, which include a Medieval carved limestone head on the east side of the doorway and a small bell tower . The current remains of the Abbey and the tower of the earlier thirteenth century church and medieval font are all that remains of this monastery of Aghaboe.