Posted on September 18, 2014 by edmooneyphotography

I first explored the ruins of Grey Abbey back in 2011 when I first started my Ruin hunting. At the time the structure was in pretty bad shape and was completely fenced off, so I didn’t get to have a good look around. A few weeks ago I stopped off as the fencing had now been taken down. Situated within a graveyard to the south of Kildare town, the ruins of the Abbey can be easily accessed from either the Kildare Village Outlet boardwalk, or from the graveyard side on the Grey Abbey road adjacent the new Aldi store. The graveyard enclosure consists of a rectangular boundary wall of mortared stone with an entrance gate in the east. It appears that the boundary wall also forms part of the south wall and gable of the Abbey. Whilst interesting in its own right, the earliest legible burial markers  could find appear to date from the 19th century. 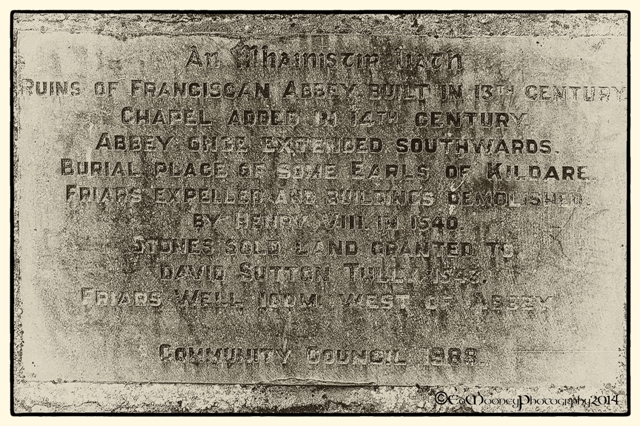 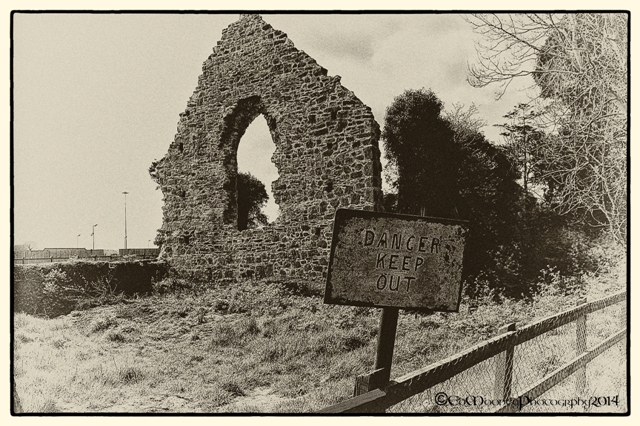 The abbey is alleged to have been built by Lord William De Vesci for the Franciscan Friars around 1254 and rumoured to have been later completed by Gerald Fitz Maurice, Lord Offaly, for the Franciscan monks. Let again it appears that the abbey got its name from the colour of the habits worn by the Franciscan monks.  De Vesci later went on to construct White Abbey for the Carmelite order in 1292. It is believed that at least four Earls of Kildare are buried in the graveyard here. John Fitz Thomas, 1st earl of Kildare was buried in the church in 1316, Thomas Fitz John, 2nd earl was buried in the Lady Chapel in 1328, followed by his son, Richard, in 1329. 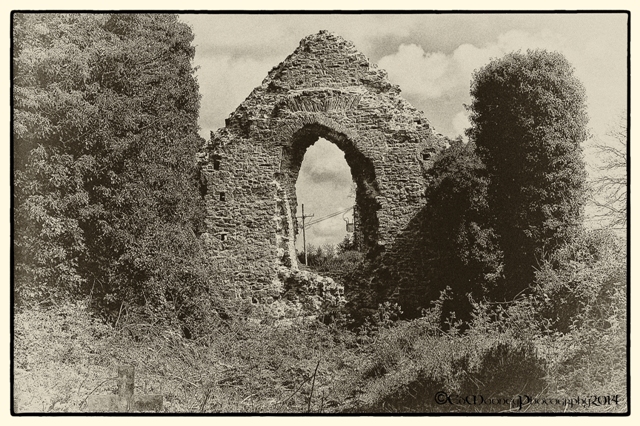 These friars were not short of money after receiving a royal grant around 1276. The friary was considerably extended in 1350 under the patronage of Joan de Burgo. When surrendered in 1539 under the Act of Suppression the considerably large Friary was said to have been completely abandoned by 1547. The friary included a church and belfry, dormitory, hall, three chambers, kitchen, cemetery and two gardens, while in November 1540, it has been recorded that all the buildings except the church and most of the cloister had been burnt in the previous May by the native O’Conor clan. 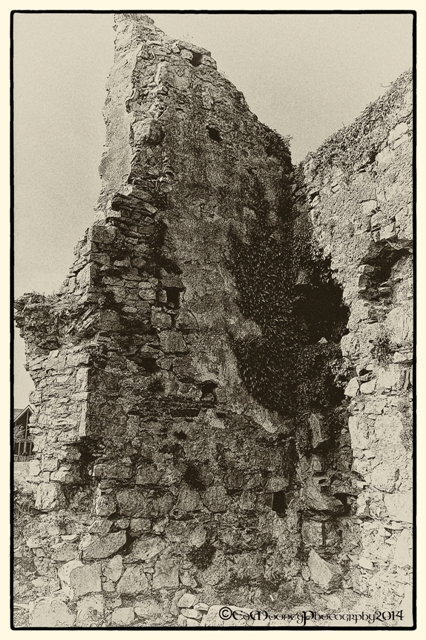 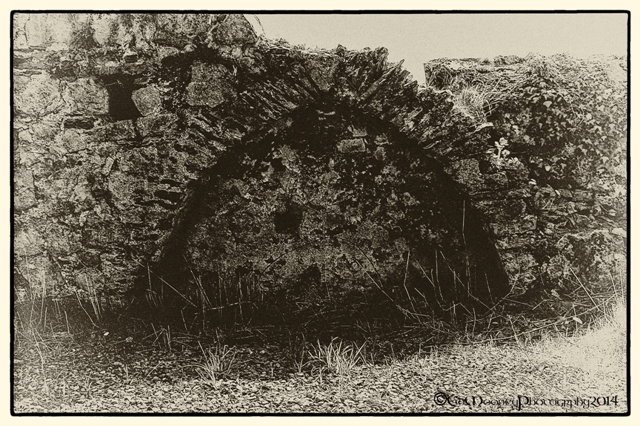 By 1621 the friary was re-established with the surviving remains comprising of  a ruined and overgrown nave and chancel church built of roughly coursed limestone blocks with no visible quoins or jambs surviving. The upstanding structure is mainly of 13th century date; the E window and probably the W window are 15th century insertions, while the buttresses on the N wall of the chancel are possibly 14th century. From a drawing by Austin Cooper in 1791 it is believed that there were one or possibly two transepts, the N one opening onto the N chapel. Only the NW angle and the partially rebuilt S wall of the nave survives. 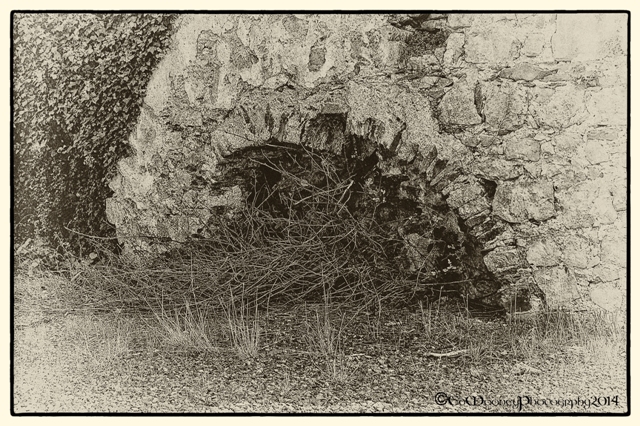 The north splay of the west window is still visible, and in the south wall there are three round-arched niches. A  granite sill of a larger and possibly  earlier window is visible in the outer face of the wall. The north wall was supported by five, free-standing buttresses, which have parted from the wall over time, and the wall contains six, poorly preserved lancets. Two portions of the original S wall survive, at its E and W ends. Nothing remains of the N side-chapel, said to have had a pointed window. In 1991, archaeological trial trenching took place prior to the proposed building of a bungalow and garage to the N of Grey Abbey turned up  five shards of local medieval pottery and a single shard of post-medieval tankard  from the topsoil. Small fragments of burnt animal bone were also recovered. 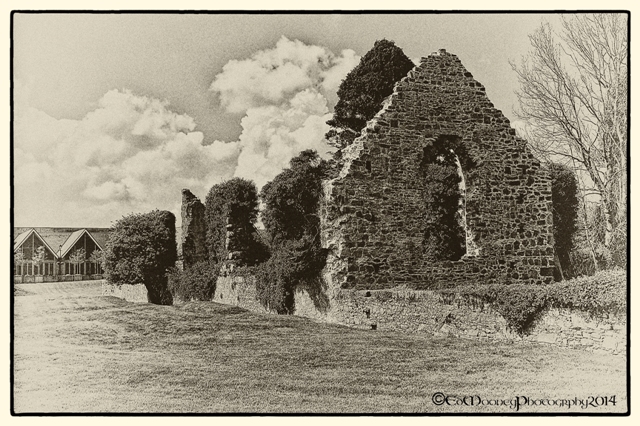 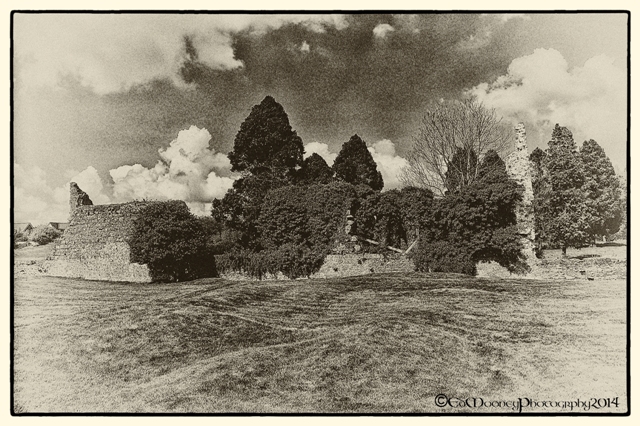 In 2004, archaeological test trenching took place before the development of the large commercial district now known as the Kildare Village Outlet. 15 trenches were excavated across two fields, including the friary grounds, A red-brick structure, possibly representing a holy well. In 2005, the remains of the friary to be directly impacted upon by the development, including the Friars’ Well, were excavated under an extension to the existing licence. The prehistoric remains of a Bronze Age fulacht fia, a cremation burial and an Iron Age kiln were found. 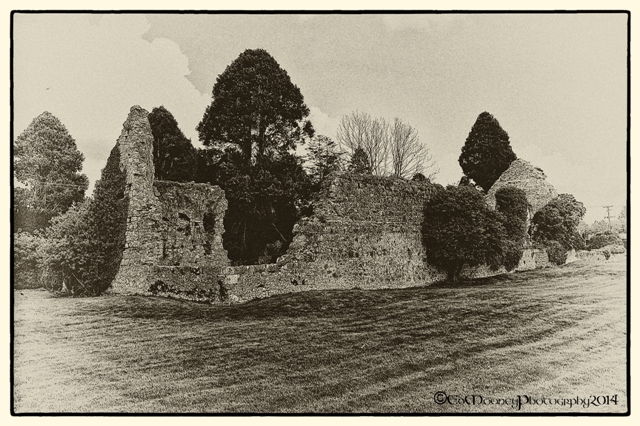