The Wizard of Kilkea Castle

Posted on October 27, 2014 by edmooneyphotography

Kilkea Castle has a long history which spans back to 1181AD when a Norman Knight Walter De Riddlesford was said to have built a motte & bailey castle here. Just for continuity Kilkea Castle came into the hands of the powerful Geraldine Dynasty after De Riddlesford’s granddaughter married Maurice Fitzgerald, whom at the time was the 3rd Baron of Offaly. Kilkea was to remain in possession of the Fitzgerald’s along with many other castles for the next 700 years. But for today’s story we will move on almost four centuries to the time of the 11th Earl of Kildare. This legend has been handed down through the ages from Lord Walter Fitzgerald and concerns the young Garrett Oge or Gerald (the younger) Fitzgerald whom became the 11th Earl of Kildare and the sole male heir of the Kildare Geraldine’s at the age of twelve, after his half-brother, Silken Thomas, the tenth earl, was executed at Tyburn in 1537 with five of his uncles. Gerald spent the next few years on the run in Ireland under the protection of his Aunt, Lady Eleanor McCarthy. Eventually the young Earl had the opportunity to escape Ireland, where he received protection from Henry VIII and his assassins, by both Francis I of France and Charles V of the Holy Roman Empire. Gerald was said to have been educated at a monastery in Liège, and he spent some years in Italy with the Bishop of Verona, the Cardinal of Mantua, and the Duke of Mantua. FitzGerald was fluent in Italian and experienced the court culture of Renaissance Italy. From there, he then moved on to Rome, and for three years studied under the guidance of his kinsman, Cardinal Reginald Pole. During his exile from Ireland, FitzGerald fought with the Knights of Rhodes against the Turks and travelled as far as Tripoli in Libya, then held by the Knights of St. John. After the death of Henry VIII in 1547, the Earl was able to return to England were Edward VI restored his Kildare lands. It was not until his involvement in the suppression of a rebellion by Sir Thomas Wyatt during the reign of Mary I that the titles of Earl of Kildare and Baron of Offaly were restored. Garrett Fitzgerald became known as the Wizard Earl due to his keen interest in alchemy, he was also said to have  been a practitioner of the Black Arts. There are numerous accounts of the Earl using these powers to transform himself into other shapes, such as a bird or beast. The following account is probably one of the most popular tales of the Wizard Earl. ‘’His wife, the Countess, had long wished to see some proof of his skill in the dark arts, and had frequently begged him to transform himself before her, but he had steadily refused to do so, as he said if he did and she became afraid, he would be taken from her, and she would never see him again. Still she persisted, and at last he said he would do as she wished on condition that she should first of all undergo three trials to test her courage; to this she willingly agreed. In the first trial the river Greese, which flows past the castle walls, at a sign from the Earl overflowed its banks and flooded the banqueting hall in which the Earl and Countess were sitting. She showed no sign of fear, and at the Earl’s command the river receded to its normal course. At the second trial a huge eel-like monster appeared, which entered by one of the windows, crawled about among the furniture of the banqueting hall, and finally coiled itself round the body of the Countess. Still she showed no fear, and at a nod from the Earl the animal uncoiled itself and disappeared. In the third test an intimate friend of the Countess, long since dead, entered the room, and passing slowly by her went out at the other end. She showed not the slightest sign of fear, and the Earl felt satisfied that he could place his fate in her keeping, but he again warned her of his danger if she lost her presence of mind while he was in another shape. He then turned himself into a black bird, flew about the room, and perching on the Countess’s shoulder commenced to sing. Suddenly a black cat appeared from under a chest, and made a spring at the bird; in an agony of fear for its safety the Countess threw up her arms to protect it and swooned away. When she came to she was alone, the bird and the cat had disappeared, and she never saw the Earl again.“

The Wizard Earl,Garrett Oge or Gerald (the younger) Fitzgerald, 11th Earl of Kildare.

It is said that Wizard Earl and his knights lie in an enchanted sleep, with their horses beside them, in a cave under the Rath on the hill of Mullaghmast, which stands, as the crow flies, five miles to the north of Kilkea Castle. Once in seven years they are said to rise up. Some have even said that they gallop round the Curragh and  across country to Kilkea Castle, where they re-enter the haunted wing, and then return to the Rath of Mullaghmast. The Earl is easily recognised as he is mounted on a white charger shod with silver shoes; when these shoes are worn out the enchantment will be broken, and he will rise up once more to drive the foes of Ireland from the land, and reign for a seven times seven number of years over the vast estates of his ancestors. Shortly before 1898 he was seen on the Curragh by a blacksmith who was crossing it in an ass-cart from Athgarvan to Kildare. A fairy blast overtook him, and he had just time to say, “God speed ye Gentlemen” to the invisible “Good People,” when he heard horses galloping up behind him; pulling to one side of the road he looked back and was terrified at seeing a troop of knights, fully armed, led by one on a white horse. The leader halted his men, and riding up to the blacksmith asked him to examine his shoes. Almost helpless from fear he stumbled out of the ass-cart and looked at each shoe, which was of silver, and then informed the knight that all the nails were sound. The knight thanked him, re-joined his troop, and galloped off. The blacksmith in a half-dazed state hastened on to Kildare, where he entered a public-house, ordered a noggin of whisky, and drank it neat. When he had thoroughly come to himself he told the men that were present what had happened to him on the Curragh; one old man who had listened to him said: “By the mortal man, ye are after seeing ‘Gerod Earla.’” This fully explained the mystery. Gerod Earla, or Earl Gerald, is the name by which the Wizard Earl is known by the peasantry. 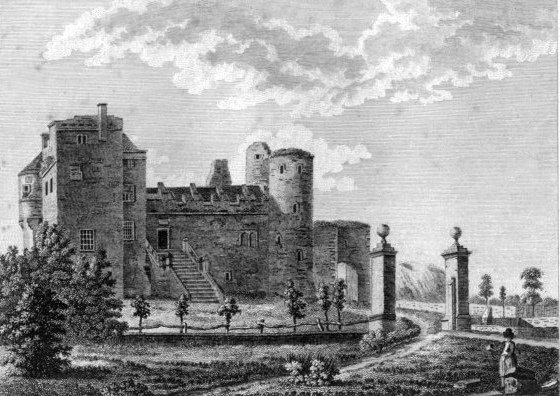 One other legend is told in connection with the Wizard Earl of a considerably later date. It is said that a farmer was returning from a fair in Athy late one evening in the direction of Ballintore, and when passing within view of the Rath of Mullaghmast he was astonished to see a bright light apparently issuing from it. Dismounting from his car he went to investigate. On approaching the Rath he noticed that the light was proceeding from a cave, in which were sleeping several men in armour, with their horses beside them. He cautiously crept up to the entrance, and seeing that neither man nor beast stirred he grew bolder and entered the chamber; he then examined the saddlery on the horses, and the armour of the men, and plucking up courage began slowly to draw a sword from its sheath; as he did so the owner’s head began to rise, and he heard a voice in Irish say, “Is the time yet come?” In terror the farmer, as he shoved the sword back, replied, “It is not, your Honour,” and then fled from the place. It is said that if the farmer had only completely unsheathed the sword the enchantment would have been broken, and the Earl would have come to his own again. Interestingly this story bears similarities to Arthurian legends regarding the hero rising during a time of great need to expel enemies from the land. If this was true, then I think Ireland is in no greater need for the Earls return than right now.

10 Responses to The Wizard of Kilkea Castle