The Werewolves of Ossory

Posted on October 30, 2014 by edmooneyphotography 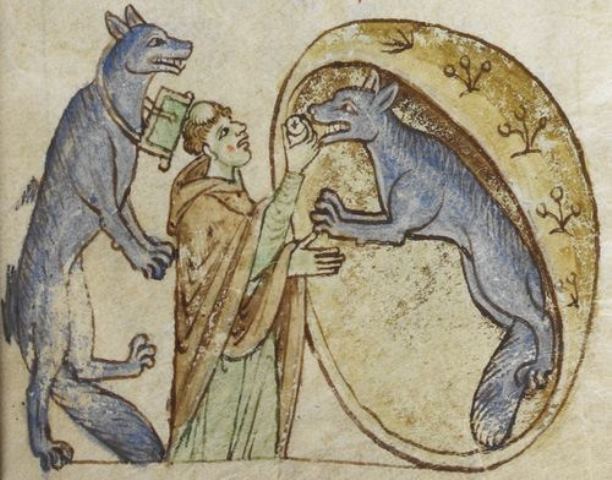 And now just in time for Halloween, allow me to share with you a Werewolf Legend from Ireland.  There are numerous stories of werewolves in Ireland throughout the centuries but, today I will share with you just one. Nobody really knows how far back in history this story goes, but it does appear to date back to the ancient lands of Ossory which incorporated modern day Kilkenny and Laois. It was said that the people of Ossory had the ability to transform into a wolf whenever they pleased. Perhaps these people were descendant from the Laignech Faelad, a tribe of extremely fierce warriors whose services in battle were not only highly sought after by Kings but because of their immense popularity and refusal to change to the new religion they were slandered and condemned by the Catholic Church as blood thirsty monsters. It was said that once these Ossorian’s took the form of a wolf, their human bodies would remain in their homes in a deathlike state until such a time as they would return. Disturbing the human form was strictly forbidden as it was believed that if a body was disturbed then the person would never be able to return to their true form and be forced to live out their lives as a wolf. Another version of the Ossorian legend states that the people of Ossory lived under an ancient curse. Every seven years, one male and one female had to change into the wolf form and live as a wolf. Once the seven years was up, if they had survived unscathed, they could return to their village and resume their human form and then another male and female would have to take their place. 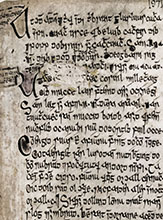 Whilst in wolf form the Ossorian’s would live together as wolves, they would hunt and live of the land attacking sheep and cattle for food as a real wolf would. But if they sustained an injury during their time as a wolf this was said to carry with them back into their human form. And if they were to die as a wolf, then that was the end of them. So I guess that this would explain why they would shy away from human contact. ‘The Lebor na hUidre’ or the ‘Book of the Dun Cow’ is a vellum manuscript dating to the 12th century which tells  many of many ancient Irish legends. It also refers to several kinds of supernatural changes, including the transformation of a man into a wolf. Tales of Irish werewolves were recorded in the Historia Brittonum by a Welsh monk named Nennius who lived in the 9th century. With further stories  also being recorded by Giraldus Cambrensis whom was also known as Gerald of Wales in the Topographia Hibernica in the 12th century. According to Giraldus, it was recorded, that a curse against the people of Ossory by St. Natalias was responsible for the werewolf lore that we know today. St. Natalias was an important Abbot from the 6th century and is said to have gotten annoyed with the Clan Allta. Now to my knowledge the Allta clan lived in what is now Co. Meath, but perhaps these cursed people travelled to Ossory to spend their several years in isolation?

In the Topographia Hibernica Giraldus recounts the tale of a travelling priest whom encountered these cursed Ossarian’s. Several years before the arrival of Prince John in Ireland, which would date our story to approx 1177AD? A Priest was travelling from Ulaid which is now Ulster to the Kingdom of Meath formerly known as Mide. He travelled with a Novice from one of the religious houses in Ulster on some unknown religious errand. The journey took them through parts of the land which still retained much of their past cultures and beliefs. One night whilst travelling through a large forest that ran along the Meath border and was knows as part of the ancient lands of Ossory, they stopped to make camp for the night. As the fire died down and the young novice began to doze there came a noise from deep within the dark forest. At first the Priest did not notice as he was deeply engrossed in his religious texts. But soon the strange noise became louder as it got closer to the camp. It soon began to resemble a human voice as it neared the clearing of the camp. The Priest although slightly startled by the voice checked on his novice whom was still asleep and cautiously stepped out to the edge of the camp. ‘Who is there’, he called. After a moment the voice called out again, but refused the priests request to make their presence known. The voice told the priest that his appearance would only frighten him away.  Although the Priest was still afraid that the voice may have been the work of the Devil, come to lead him astray, he clutched his crucifix tightly and again attempted to lure the unknown voice out into the open. By this time the young novice had been woken and was crouched by the fire in terror of what lay hidden outside the camp.  By now although still out of view the strange voice had moved closer to the camp and the voice became more distinctive. The priest signalled the novice to be quiet as he once again tried to lure the source of the voice out into the clearing. ‘You cannot frighten me’, he exclaimed, ‘for I am protected by God’. Suddenly there was a rustling of leaves and from the darkness appeared a huge grey wolf. The young novice attempted to scream out, but his terror made him dumb and he ran off into the woods and was never heard from again.

Trying his best not to show his fear the priest cleared his throat and began to converse with the beast. The wolf explained about the terrible curse and how he was forced to live as a wolf for several years. As the priest begun to compose himself he was surprised to learn that these Ossorians were actually Christians and that the wolf had a mate whom was also afflicted with the same curse. But unlike the Wolf whom stood before the priest, this she-wolf lay resting deep within the forest and was in dire need of the priests services. Slowly the Priest began to relax as his fears waned and he begun to enquire further as to how these people became cursed. After explaining who his people had been cursed long ago for a sin that had been long forgotten, and that they would always be forced to endure the curse as the Abbot Natalias was long dead. The Priest slowly began to forget that the person whom he was speaking with was a wolf and showed sympathy towards his plight. The wolf watched the Priest warily before asking him to accompany the werewolf deep into the forest where his wolf-wife was resting, close to death. The priest, whom may have been embarrassed by the Abbot Natalias’s bad temper, took the time to listen to an unusual request from the werewolf. So the pair made their way through the dark forest, not speaking a word until they reached the badly injured she wolf whom lay dying under a large Oak. She at first began to panic at the site of a human so close but her injuries prevented her from doing anything. As agreed the priest administered the last rites to the she-wolf before she passed away. The other wolf then disappeared into the forest to finish his seven years. As for the priest, his name has never been mentioned in any of the accounts, but I wonder how he managed to explain administering the last rights for a werewolf to his superiors???

The Priest and the Wolf

For many the Werewolf is seen in a negative light, an evil creature, cursed Gaelic word for wolf is ‘Mac Tire’ which translates  literally to ‘Son of the countryside’. These creatures have long been seen as protectors and defenders of their human friends or family as the case may be. From the three daughters of Airitech whom were said to be werewolves, to the goddess The Mórrígan whom was said to have taken on the form of a red wolf during her battle with CúChulainn.  Cormac mac Airt the legendary high king of Ireland whom ruled during the time of Fionn Mac Cumhaill and the Fianna was said to have been raised by wolves and could communicate with them. Legend says that  four wolves would accompany him in his rebellion against Lugaid mac Con, and that he was accompanied by them until the end of his life. So whether or not you believe in this supernatural or cursed creature, is entirely up to you. But it is quite hard to deny that some truth exists with the long historical association Ireland shares with the wolf.

Photographer, Blogger, Ruinhunter, with an unhealthy obsession for history, mythology and the arcane.
View all posts by edmooneyphotography →
This entry was posted in Halloween and tagged EdMooneyPhotography, Folklore, Halloween, Ireland, Legend, Lycanthropy, Mythology, Ossory, Samhain, Werewolf, Werewolves. Bookmark the permalink.

28 Responses to The Werewolves of Ossory