Posted on November 4, 2014 by edmooneyphotography 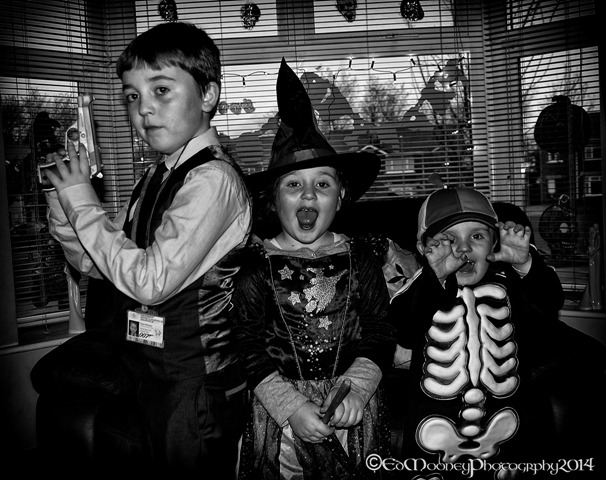 With Halloween officially over and the floodgates for Christmas well and truely open. I decided to use a recent shot from Halloween for this weeks challenge. Many of you will be familiar with these three little monsters, but for those whom are not. These three characters are my pride and joy, all dressed up and ready to go ‘trick or treating’. Ryan (9) wanted to be James Bond, he is a huge fan of the movies especially the older ones, so complete with his James Bond SIS card he was in his element. Ava (5) wanted to be a witch again for the third year in a row, complete with a magic broom, which she had been using to fly around the house on for the previous two weeks. Then we have Dylan (3). What can I say, Dylan is the crazy one, with not an ounce of fear in his body and a natural ability for mischief. He finally settled on a skeleton costume, but wanted to trade in his mask for a baseball cap. Hey who am I to argue with his choice?

I took this on Friday just before they went out ‘trick or treating’ and was lucky to get it as they were running short on patience in eager anticipation of all the candy they might get. So if you are into Black & White photography as much as I am, then I highly recommend that you head on over to Leanne Cole’s blog where you can either contribute your own B&W images or view the images of some really good photographers. The Challenge goes live later today depending on your time zone 🙂