Posted on May 7, 2015 by edmooneyphotography

It’s been a long while since I have featured my town, Monasterevin in my Ruin hunting. You may remember my previous articles on The Hulk, Passlands Cemetery or indeed the two piece exclusive essay I did for Life in Russia on the fascinating history of the town. It was so big that Steve published it as a two part series, Part 1 can be seen HERE and Part 2 HERE.  I have been wanting to visit this rather interesting site for a number of years now and considering that it is located practically right on my doorstep, there really is no excuse for not having visited sooner. I guess my biggest problem was finding a way into the cemetery. It is located on pastoral land in the townland of Clogheen or Quinsboro as it is also known, and is approx. three fields away from any road, with no signs of a right of way. So last Sunday I went out with a fellow photographer whom just happens to run the Monasterevin Heritage Facebook page. Utilizing his expertise and a couple of phone calls later we were strolling through a local farm yard (with the kind permission from the farmer of course) on our way to explore this elusive graveyard. 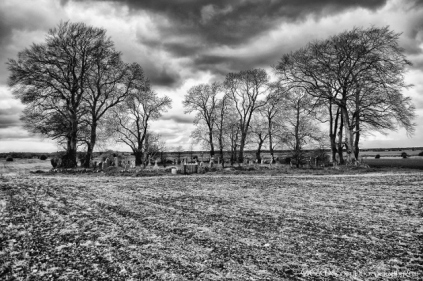 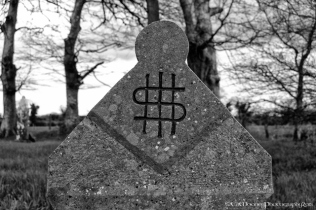 Due to certain time constraint, I was unable to exhaust all my leads, whilst researching this site and so I have had to piece this article from what little information I could assemble. If further information surfaces I will update this article accordingly. So on with the show, as you can see, the Yew Tree cemetery is located on farm lands right beside the river Figile. These out of the way graveyards are quite common in the country side, and most hold little historical significance. However the Yew Tree does not fall into this category and is a site which can be dated back as far as the Middle Stone, when in the Neolithic period the first farmer’s moved into the Barrow Valley and settled at the Ford on the Figile right beside the Yew Tree site. With its unusual crop marking on the landscape which can only be seen from the air. I would strongly suggest that this may have been an important site to our pagan ancestors. 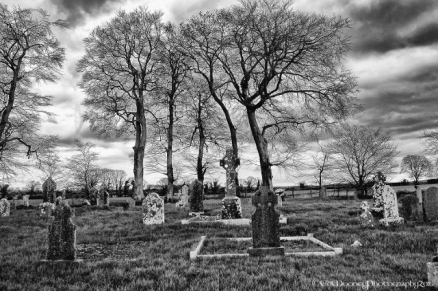 The cemetery today consists of a circular walled enclosure, with an iron entrance gate to the east. Today there is very little left of the wall, with a fairly decent wire fence, presumably put in place by the farmer to keep the livestock away. The gate is held in place between two granite piers. What surprised me most about this particular site was the obvious lack of Yew trees. Sure there where a number of beech and ash trees around the perimeter, but no Yew’s. So how did it get its name? Well it is a well-known fact that many graveyards contain Yew Tree’s so it is no far reach to assume that there were once many such trees contained within this graveyard? In fact it is claimed that in 1307, Edward I of England ordered Yew trees be planted around religious sites due to the protection given to church buildings by their tight knitted growth. The Yew branches, on touching the ground take root and sprout again – this became the symbol of death, rebirth and therefore immortality. In Vampire lore, ‘Only a stake made from the Yew branch would truly kill the un-dead’. Yews are actually poisonous, so by planting them in the churchyards, ensured that livestock would not be allowed to graze on hallowed ground. As Yew was the traditional wood used for making long bows, I would suggest that at some stage during our troubled past the remaining Yews at the graveyard may have been used to construct such weapons. 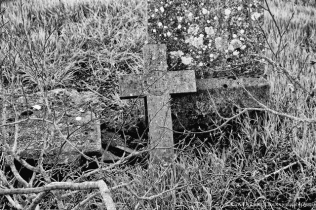 Another historical association from the Yew Tree cemeteries past is a connection to the early Christian monastery of Rosglas, founded by Saint Evin, from where the town on Monasterevin takes its name. Founded in the sixth century, Rosglas na Moinneach, (Green Wood of the Munster Men), as it was known was located at the present day Moore Abbey, about two miles from the Yew Tree Cemetery and was well known for being a place of sanctuary. Our cemetery was once known as Clogheen na Monia which means either (the Stoney place of the Munster men) or (the little bell of the Munster men) depending on you take of its translation. It was also the location of a church which was said to have housed St. Evins Bell. This is recorded in the Annála Na gCeithre Máistrí or the Annals of the Four Masters which also tells us that St. Evins bell was a popular swearing relic. As the bell was kept in territory which was mainly controlled by the native O’Dempsey clan, it would not be far-fetched to assume that the bell would have been used by the local clan chieftains for swearing oaths. The annals also mention that the Brehon’s of Munster had use of the bell. In the river Figile which runs past the Yew tree, there is a spot known locally as the Bell hole. According to local tradition, it is said that the bell fell from the church and rolled down into the river after it had been falsely sworn upon. Another tale states that Evin had a branch monastery here and that the bell had been thrown into the river for safe keeping during the time of the Viking raids. Back in 1951, there were a number of attempts to locate and find the bell, however these attempts were unsuccessful and the bell has still yet to be found. Today the earliest legible grave stone dates back to 1721, but there are many tell-tale signs of earlier graves. On a final note, part of the left hand granite pier bears a vague inscription. I tried to take an image of this with a view to enhancing the image but this did not work so I will need to return to take a rubbing and hopefully figure out what it says. 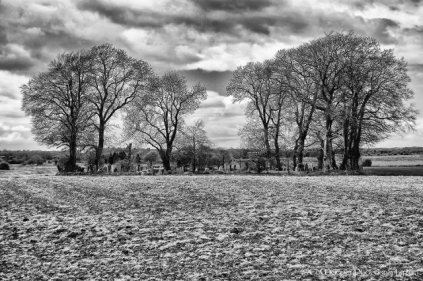