Posted on October 4, 2015 by edmooneyphotography 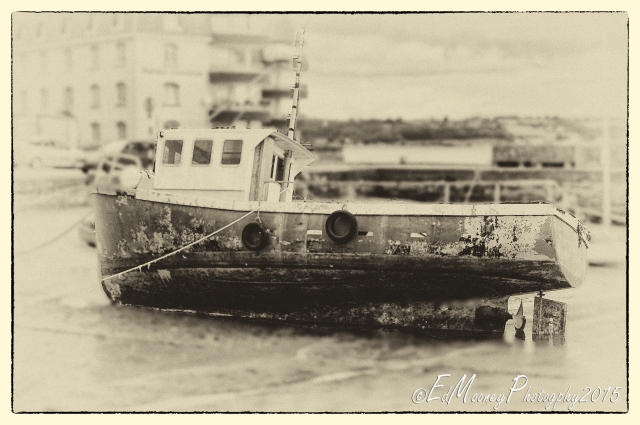 Its not very often that I get to post on a Sunday, so I took the opportunity to catch up on some random images from the family trip to Youghal in Cork earlier in the year. Whilst strolling around the town in between rain showers I spotted this little boat stuck on the beach. Well actually the tide was out, but the image stuck in my mind as an abandoned or marooned boat and so I took the shot to play with at a later stage. The skies were not great on the day, which was a shame, as a good sky can tend to make or break an image. So after playing around with different approaches, I went for an antique plate look which I quite like. It reminds me of the kind of photograph you might come across in an old photo album or book. Although it would probably benefit from a few cracks and tears around the edges to complete the authentic look.

Well thats it for todays random post, enjoy the rest of your weekend. Ill be putting the finishing touches to tomorrows post which I am really excited about. And dont forget submissions for the Spooktaculart 2015 can now be sent in, check out Spooktacular for full details. 🙂

Photographer, Blogger, Ruinhunter, with an unhealthy obsession for history, mythology and the arcane.
View all posts by edmooneyphotography →
This entry was posted in Photography, Sunday Post and tagged Boat, Cork, Ireland, Nikon, photographer, Photography, Stranded, Travel, Youghal. Bookmark the permalink.