Posted on November 3, 2015 by edmooneyphotography

To wrap up my recent trip to Ardmore in Waterford, we take a look at the last remaining site within the monastic enclosure, the Cathedral. Ardmore was historically the site of an early church founded by St. Declan in the fifth century. Although with the exception of the death of his successor St. Ultan there is little known recorded history of the site after 555 A.D. The annals state that the Cathedral was constructed sometime between 1170 and 1210 A.D. by the then bishop of Ardmore Moel-ettrim Ó Duibhe-rathra. Built in up to three phases the Cathedral consists of a nave and chancel with some of the lower foundations and walls belonging to the earlier church built by Declan over 500 years previously.

Along with the Round Tower the Cathedral is the newest addition to the monastic settlement, as they were both only recently added in the 12th century. The Oratory of St. Declan, were the saint is rumoured to have been laid to rest dates from 8th century. The last and possible oldest point of interest are the two Ogham Stones, which can be found in the niched arch of the choir.  Now putting a date to these ancient stones is not an easy task, but it would not be a far stretch of the imagination to say that they most likely pre date the arrival of Declan to the Ardmore area. It was not uncommon for the early Christians to build their churches and monasteries on important sites, so considering Declan’s family links to the Déisi Muman this is a strong possibility. 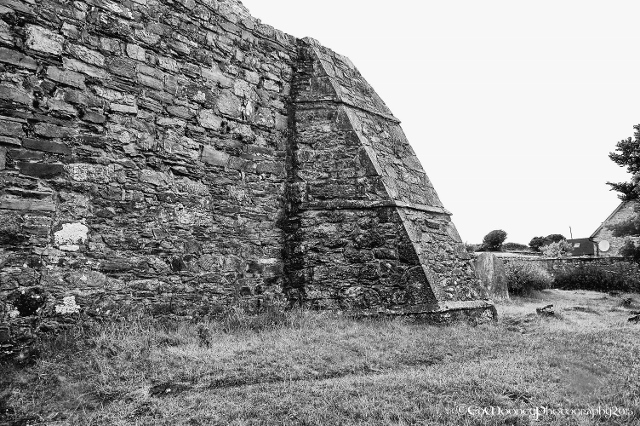 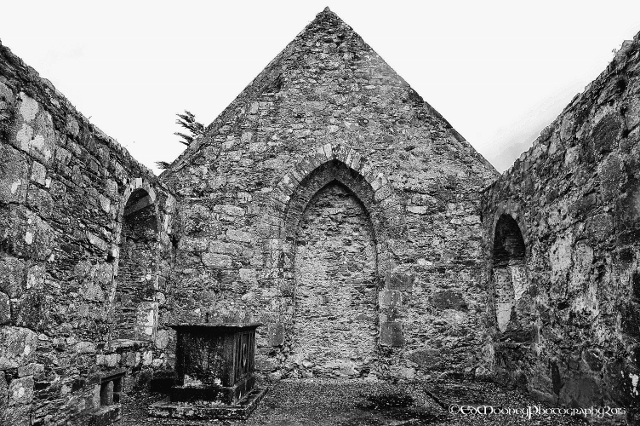 The chancel arch might have well been flanked by wall niches as was common practise at the time, along with the four round headed windows in the nave and two tomb recesses and arcading were added in the later part of the 12th century. This was then followed by an extension of the west end of the nave with the chancel arch being rebuilt to a pointed arch design. The north and south walls both had doorways inserted and the arcading on the outside of the west wall was re done. The sculptures on the west wall are believed to have been re-set during the 17th century. The arcading on the W wall consists of a row of thirteen panels on a chamfered string course.  Nine of these panels have carvings of religious depictions, although it is most likely that all the panels would have had carvings. These depictions in the panels has been interpreted, as possibly the Majestas, The Last Judgement and a number of bishops. 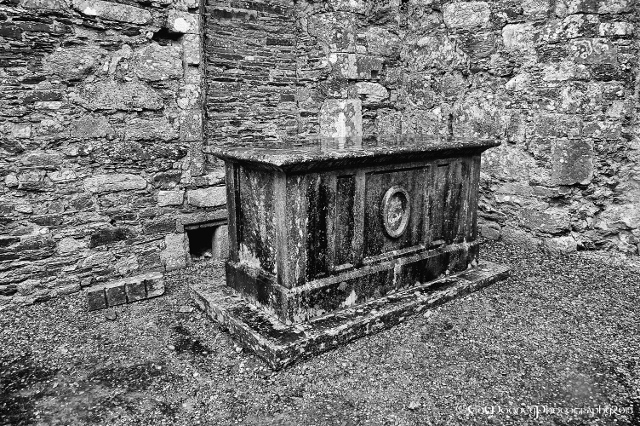 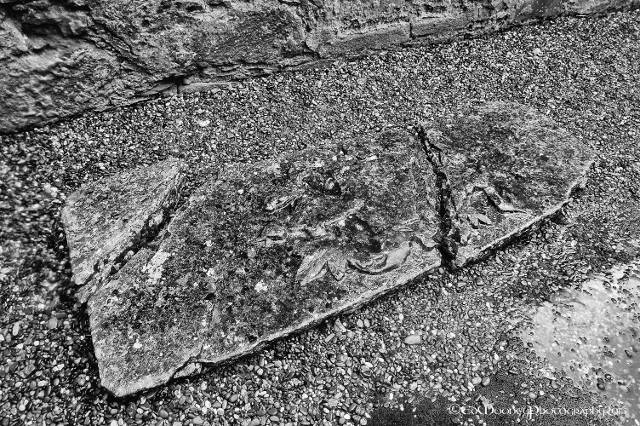 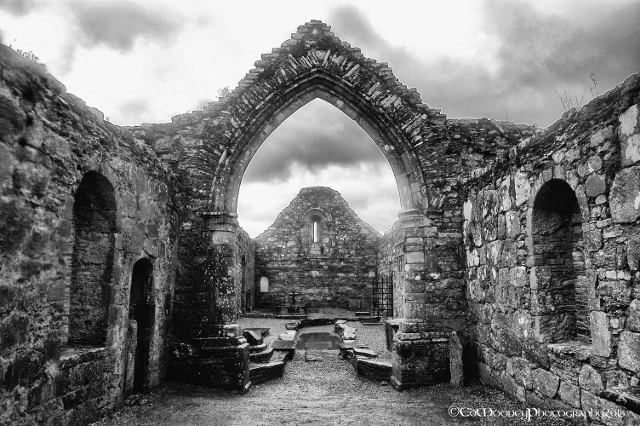 Underneath these panels there where three larger lunettes although only two now survive. The northern one contains three sculpted panels, one of which depicts Adam and Eve. Whilst the one on the south contains seven panels combined into two scenes; the Judgement of Solomon over the Adoration of the Magi. Within the nave there are several medieval grave slabs and a cross inscribed stone. The original cap stone from the Round Tower was also said to have been placed here for safe keeping, but I could not find any trace of it. 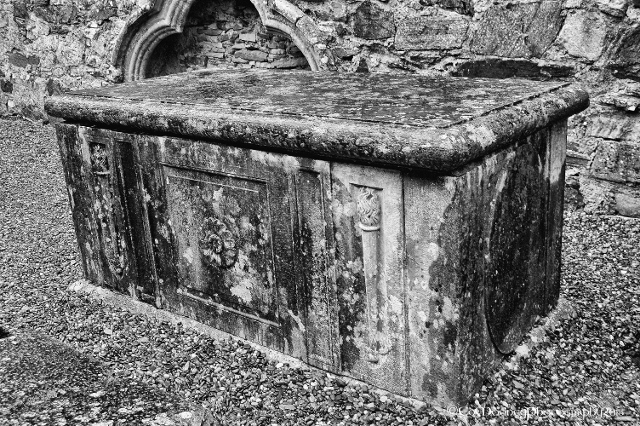 An octagonal font with a circular basin and stiff-leaf decoration that was originally supported on four pillars, was moved from here in the early part of the 19th century, but I did not have the time to go and look for it on this occasion. It is said to have been moved to a nearby Church of Ireland church, so I guess that this will be another addition to my ever increasing bucket list, for the next time I am in the area. According to a crudely incised date stone three buttresses were added to the cathedral in 1630.  By, 1642 after the siege which I spoke about previously the chancel of the cathedral continued in use as a Protestant church until 1838, when the present Church of Ireland church was built. 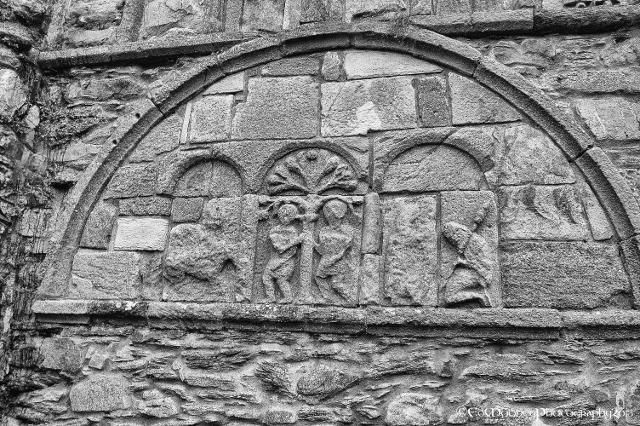 Despite the low clouds and heavy rain during my visit, Ardmore is perched up high on a hill which overlooks the sea. The scenery here is said to be beautiful, but sadly I missed out on a chance to witness this. No doubt I will be back again as during my research I came across a few nearby points of interest which will need to be explored. 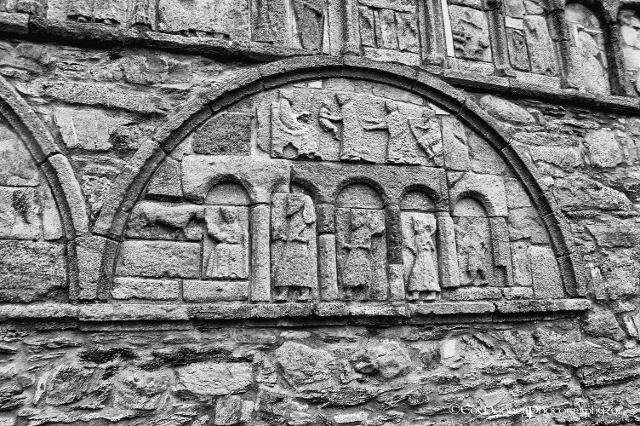 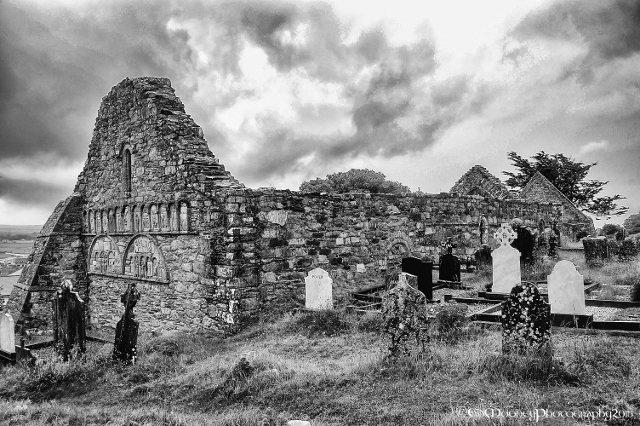