Fraoch Oileán and the Knights Hospitallers

Posted on January 11, 2016 by edmooneyphotography 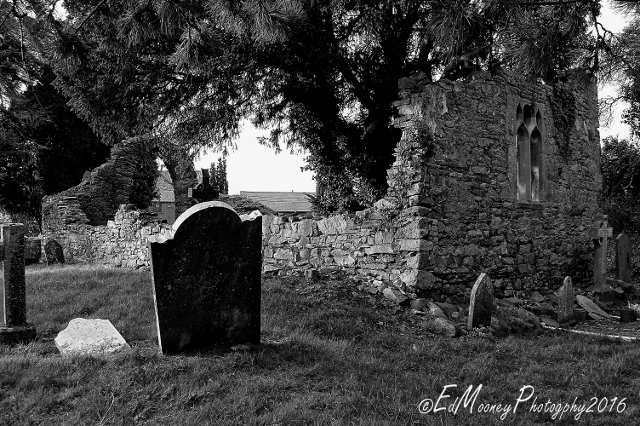 Johnstown is a small village just outside Naas in County Kildare. I have passed by it countless times over the years and just by chance whilst hunting for a standing stone I came across a small little graveyard and church with an amazing history. There are signs of early human activity in the area dating back to ancient times, the most notable being the Holed stone which rests in a field towards the Southern end of the village. The stone is linked to an astronomical alignment to the summer solstice. Today though we are going to have a look at the medieval church at the other end of the village. Originally known as Fraoch Oileán the village name changed to Johnstown, presumably taking the name from the religious order whom established themselves in the area. 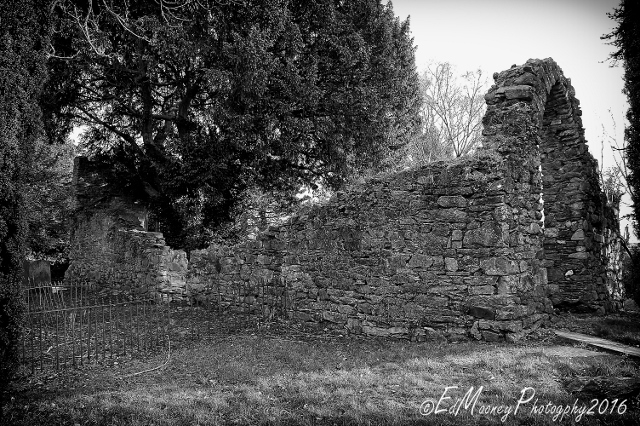 Not to be confused with their infamous Templar brothers, the Knights Hospitallers  or The Order of the Knights of Saint John of Jerusalem  to give them their full title, where one of the big five orders to rise up during the first crusade. Believed to have formed around 1023 at the Amalfitan hospital in Jerusalem to provide care for sick, poor or injured pilgrims coming to the Holy Land. After the crusade they became an official religious and military order under its very own papal charter, Pie Postulatio Voluntatis’, which was issued by Pope Paschal II in 1113. They were charged with the care of pilgrims and defending the holy land against Islamic forces. Their main base of operations was the island of Rhodes and later from Malta. Theirs is a fascinating history, but far too expansive to include in this article. 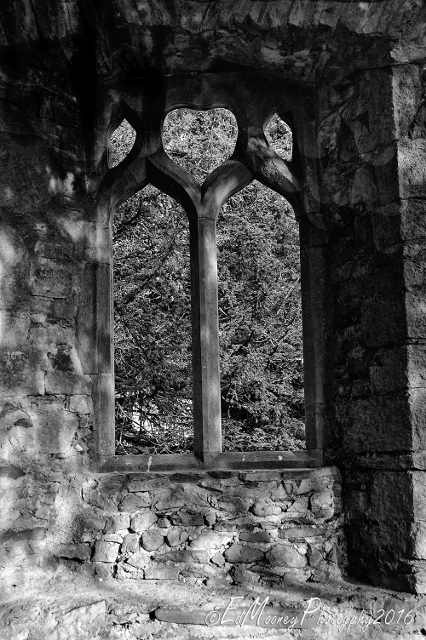 They first arrived on Ireland’s shores during the Invasion by Norman forces where they first established themselves in Wexford around 1172AD. Two years later a Priory was set up for them at Kilmainham in Dublin by the Earl of Pembroke, Richard De Clare. Within forty years the order was said to have acquired up to 129 properties under Pope Innocent III. Despite this the number of members in Ireland was said to have been quite small, perhaps only 30 -40 members. In Kildare the knights had three Perceptorys at Tully, Killybegs and Kilteel as well as an Abbey in nearby Naas. Whilst I can’t find a definitive date for the church in Johnstown, I did manage to find the earliest grave slab dating back to 1430AD. So they may very well have arrived in Johnstown sometime between 1212 and 1430AD. Much like every other country in which the order resided their primary role was to provide hospitality to pilgrims and travellers. But with the ongoing attacks by native Gaelic clans following the Norman invasion many of the orders strongholds also served as military outposts. This medieval order of knights who held lands in the surrounding area until the Dissolution of the Monasteries in the 1540s. 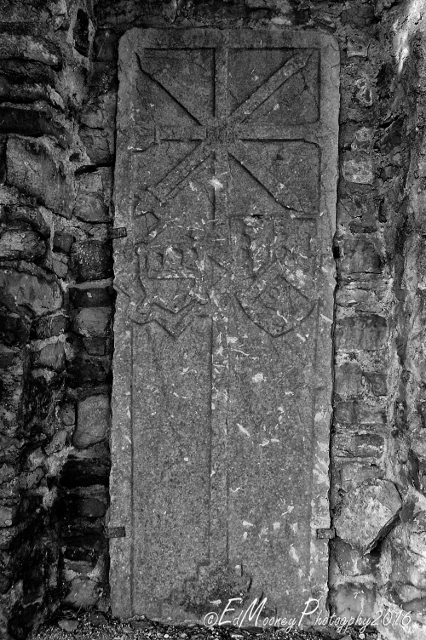 The church itself stands on a slight rise near the centre of a graveyard. It is a rectangular structure which appears to have had some restoration work carried out over the years. Built mostly from rubble and limestone. There are a number of boulders of granite and tufa where a chancel may once have stood. The west wall contains a rather large two cantered arch. The entrance doorway in the north wall looks does not appear to be part of the original structure and may very well be a later addition. In the east gable wall there is a double ogee-headed window with a broad, square-headed embrasure and sill. Much of the south wall seems to have been rebuilt, and there is a round-headed window-piece which has been reused on the inner wall face to act as a stoup. Also worthy of a mention are the octagonal base of a medieval baptismal font which lies in the confines of the chancel and is in reasonable condition for its age, and a fine example of a lancet window which remains surprisingly intact in comparison to the remainder of the structure. 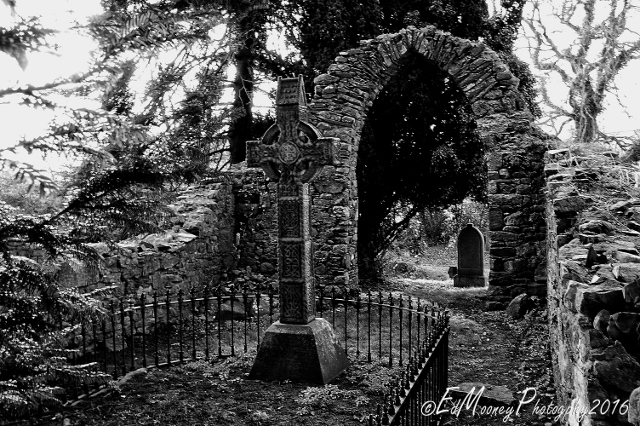 One of the most famous families associated with Johnstown were the Flatsbury’s. They first showed up in Kildare during the 13th century and were quite an influential bunch. Members of the Flatsbury family held lofty positions in Ireland from collectors of the Kings revenue to Sherriff’s of Kildare and some where even members of parliament. So it just goes to show that the ‘Big Boys’, club which exists today in politics is an age old, time honoured tradition. J A large plot can be seen tucked away in a corner near the entrance to the graveyard which is the family plot of the Bourke clan. Today it is marked by a simple plain stone cross. And there is a rather nice flat stone slab which still rests within the graveyard at Johnstown, it is connected to the Flatsbury and Wogan families and it has the family Coat of Arms carved into it. Usually when you come across this type of grave marker they are either badly weather worn or cracked and broken up. So it was nice to see this one surviving the years. It is believed to be the grave slab of James Flatsbury whom had been married to Eleanor Wogan back in 1436. The Wogans were another big family in the Kildare area, with the family stronghold at Rathcoffey Castle. Another well-known member for the Flatsbury family was Philip. He was a scholar and scribe whom is best known for compiling the ‘Red Book of Kildare’, in 1503 for the Earl of Kildare, Garret ‘Og’ Fitzgerald. This book contained the details of all the Fitzgerald estates including grants and title deeds. Considering what I have seen of these holdings, this book must have been quite an impressive tome. After the rebellion of Silken Thomas, Garret’s son the book mysteriously disappeared before eventually resurfacing in Trinity College Dublin, where it now resides.  In 1641 the lands around Johnstown and Palmerstown were confiscated from the Flatsbury’s and eventually granted to a family from the West of Ireland known as the Bourke’s. 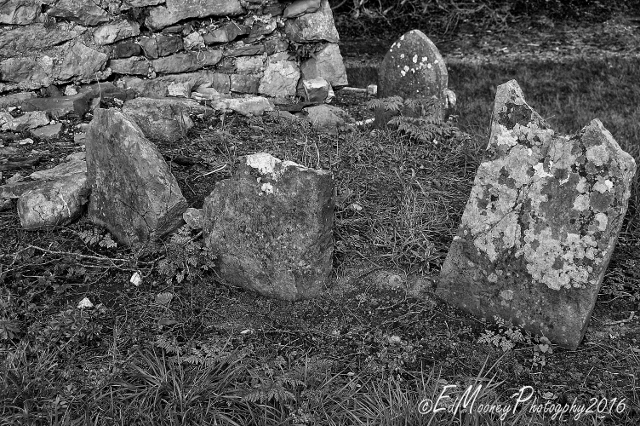 Much like the Flatsbury’s, the Bourke’s did quite well for themselves with their new found wealth. They went on to acquire the titles of ‘Lord Naas’, and ‘Earl of Mayo’, and held numerous Crown offices. Perhaps their most famous member was a chap was Richard Southwell Bourke, the sixth Earl of Mayo, whom was also known in the village as ‘The Pickled Earl”. It’s actually a funny story, Richard was appointed Chief Secretary of Ireland on three occasions during the 1860s before going on to become the Viceroy of India, where he was stabbed to death in 1872. This left the British Crown with a bit of a problem, how could they get his remains back to Kildare from India him rotting away. Well as the story goes, he was placed in a barrel of Rum for the long voyage home. Not a particularly nice way to end, and a terrible waste of good rum, but it did however earn him the amusing moniker amongst the locals. One of the most striking features within the confines of the church is the wonderfully ornate Celtic cross. And it is under this cross that Richard was buried. 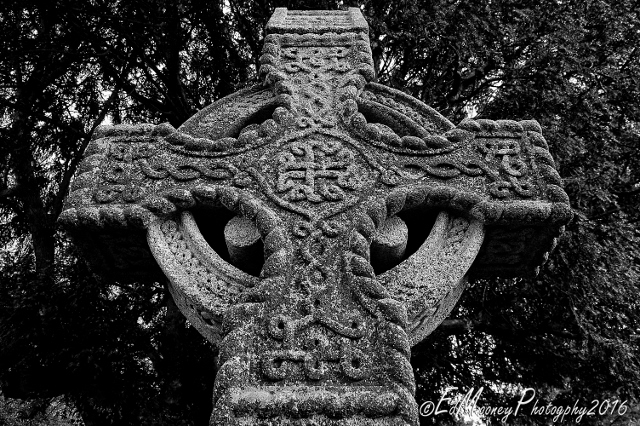 67 Responses to Fraoch Oileán and the Knights Hospitallers