Round Tower of Diseart Diarmada

Posted on March 7, 2016 by edmooneyphotography 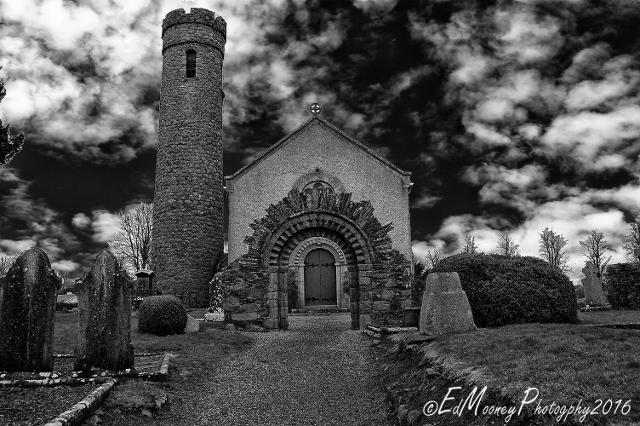 Continuing on from a previous post on Castledermot we continue on from the Romanesque Archway on the grounds of St. John’s, and move on to the Round Tower. Round Towers can be found all over the country in various states of ruin. But back in their day they would have Im sure held a massive influence over the lands on which they stood. There are many of these structures to be found around the country and each one that I have visited to date always seems to have its own unique differences.  The Tower at Castledermot which is believed to have been built in the 10th Century is certainly no exception. Round Towers were commonly built on the West side of churches however here we find it lying to the North of the church.  Perhaps an earlier church from around the time of the tower once stood in a different alignment? Or is there another reason for this deviation? Some of the information about the great history and archaeology of this great site comes from the guys at Abarta Heritage. Please take a moment and check out the link at the end of this post where you can hear the story for yourself with their free audio guides. 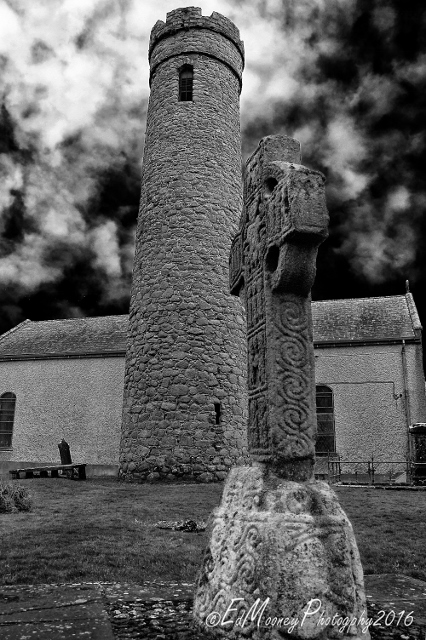 The other strange thing you may notice about this Tower is the fact that not only is it built very close to the current church, or should I say that the church was built very close to the tower as the Tower was constructed long before its neighbour. Another irregularity is that the doorway seems to have been built at ground level unlike others where the entrance doorway would be located a couple of meters above the ground, and it was believed this was to afford the people inside some degree of projection. But this is now highly debated. Then we have the tower which is connected to the nave of the church by a small corridor, on the day I visited the church was closed so I was unable to have a look on the inside. Im sure that there are reasonable explanations for all these facts. Perhaps on my next visit to Castledermot I may find the answers!

The Tower itself is only about 20 meters in height so it is not as visibly impressive as say Glendalough or Kildare. But Castledermot is a treasure trove of interesting ruins and history, so and this tower is a part of that heritage. At some stage I can only assume that the conical roof, a standard feature of many of these towers was removed and replaced with battlements. Not a common feature, but there are a few of these around the country, such as the one at St. Brigid’s in Kildare. It was built using uncoursed granite with limestone pinning’s. It has five floors  with medieval era crenellations above two string courses, but the  floors do not correspond to the original levels. The entrance is strangely at ground level through a flat lintelled doorway. I was unable to see any sign of a doorway at height, so perhaps it never had one or the brickwork was matched carefully to the original. There is an arched window on the first floor, and a flat headed window between the second and third floors. The windows at the top, and the crenellations date from the sixteenth century. It is joined to the church by a vaulted corridor with wicker centring, of fifteenth century type. The tower itself appears to be in good repair and I will be definitely returning here to see if I can gain access to the inside and see what else I can find.

55 Responses to Round Tower of Diseart Diarmada