Posted on March 7, 2019 by edmooneyphotography

On a recent trip to Kerry I got the opportunity to do a little sightseeing and temporarily resurrect ‘The Ruinhunter’ 😊.  I’ve missed exploring over the last few years and although I have no immediate plans to resume on a regular basis, the passion is still there and I wanted to share my experience with you. I will eventually return too my endeavors but current circumstances don’t afford too many opportunities. So, until this changes I will endeavor to post when and where the opportunity arises. First up was a rare favourite find of mine, An Ogham Stone, at Derrynane in Co. Kerry, also known as the Caherdaniel Ogham Stone, or by its Gaelic name Cloch Oghaim Dhoire Fhíonáin Beag, it is said to date back to 500 – 550A.D. This is only the 3rd, well fourth Ogham stone I have encountered if you count the two found in Ardmore. The first I found way back in 2014 at Donard.

Ogham is basically a 25-letter alphabet which is said to be based on the Roman alphabet. It is believed to be the earliest known form of writing in Ireland, which dates to approx. 4th century A.D. and was in use for around 500 years. This alphabet is made up of twenty-five characters which are represented by a series of straight or slanted lines. In early Christian times the Ogham Stone appear to have been used as commemorative stones, normally to mark someone’s final resting place or as boundary marker. Interestingly Ogham is sometimes referred to as the “Celtic Tree Alphabet” as many of the characters relate to the sacred trees of Ireland. Want to know more?  Check out a fantastic piece ogham-the secret code of our ancestors by fellow blogger Ali Isaac. 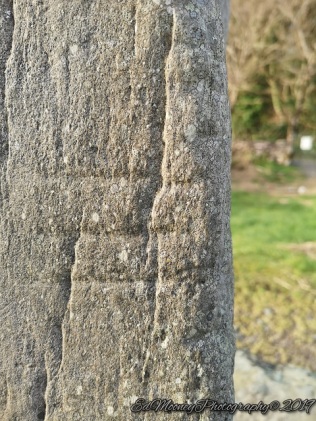 According to the National Monuments Service the stone was uncovered under water on the Derrynane strand before being moved to its current location by the Office of Public Works back in the 1940’s. It’s quite easy to find the stone and is clearly signposted from the road. The stone itself as you could imagine is extremely eroded, no doubt from spending who knows how long submerged under water. The stone stands at over 2 meters in height and is made from Sandstone. Sadly, erosion makes it almost impossible to decipher the inscription, however having read the stone, R.A.S. Macalister in his (Corpus Inscriptionum Insularum Celticarum, 1945) gives us the following ‘ANM LLATIGNI MAQ M[I]N[E]RC M[UCOI] Q[…]CI’. As you can see much of the inscription was missing even back then.  The only translation I managed to find was from Wikipedia as follows, (“name of Llatigni, son of Minerc, of the tribe of Q…ci”).

Despite the fact that this sheds no light on the historical significance of the stone, it still remains for me a fascinating piece of our heritage and history. Which is now thankfully subject to a preservation order.