Posted on March 26, 2019 by edmooneyphotography 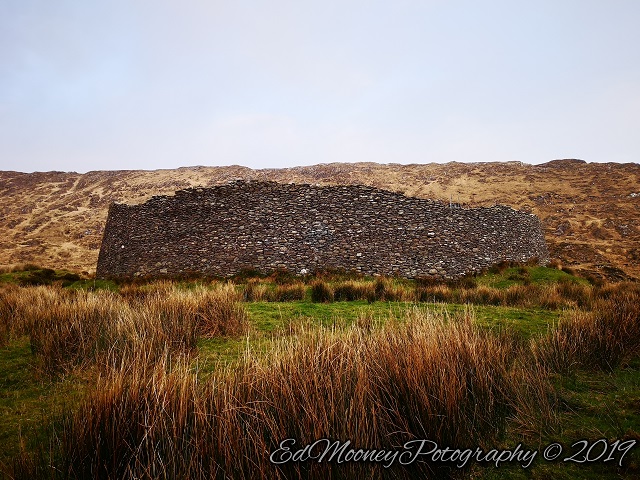 Kerry or ‘The Kingdom’ as it is also known, is a place very close to my heart. Having recently spent a few days down there. Eventually the plan is for the Ruinhunter to relocate to Kerry on a permanent basis. Aside from personal reasons, Kerry is also a Ruinhunter’s paradise. There are literally hundreds of fantastic monuments and ruins scattered across the landscape just waiting to be explored. And I am already plotting numerous sites to explore on my next trip. The last place I visited was a first of a kind for me. A Stone fort which is believed to date back to the Iron Age circa 300-400AD. Having only seen images of these stone forts previously, I was damn excited as we approached.

Located just off the Ring of Kerry not too far from CastleCove.  The fort resides at the head of a valley on the Iveragh Peninsula, and certainly did not disappoint. On the path which leads up toward the Fort there is a gate with two rather amusing signs, instructing that all visitors must pay a Trespass fee to enter. 😊 At some stage a rather clever individual left a response in permanent marker on the notice. Now I never condone such acts of graffiti. My motto has always been ‘Leave nothing behind but footprints’. But the message does raise a rather interesting point. But that’s an argument for another time. As we approached the fort it was obvious that there were some repair works going on. And it looked like we might not have been able to get inside this magnificent structure. But Ive never been one to be deterred so easily and we proceeded up to the entrance. There was a wooden gate blocking the doorway with a site notice. The bolt was unlocked, so as my SAFE pass is still in date I didn’t see any issue in entering and we closed the gate behind us. 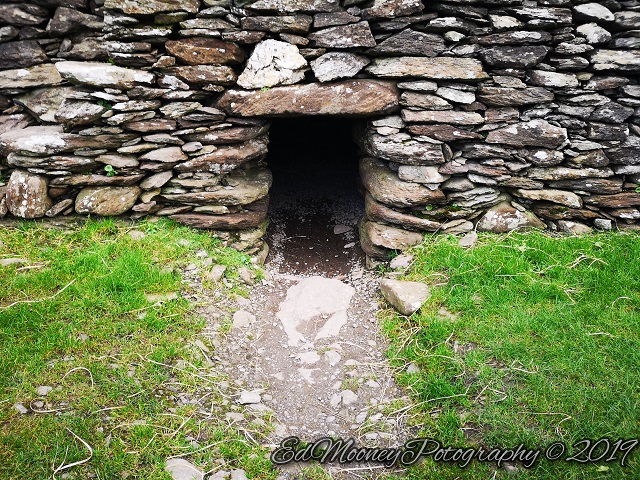 Once inside its amazing, you can almost visualize what is was like to live here 1600 years ago. There are signs outside the fort of a fosse and external bank which would most likely have been protected by wooden fencing. The Lintelled doorway leads you into the fort which walls are extremely impressive. There about 4 meters thick and are said to have been 6 meters in height although not all of the wall currently reaches this height. Built entirely from uncoursed stone, no mortar was used in the construction. There are two small chambers built into the walls, most likely these would have been used for storing foods etc. around the inside of the wall are a few twin stairways which lead up to the top of the rampart. The Fort itself is about 30mtrs in diameter and would have contained within its walls, a number of smaller structures and dwellings which sadly no longer exist. 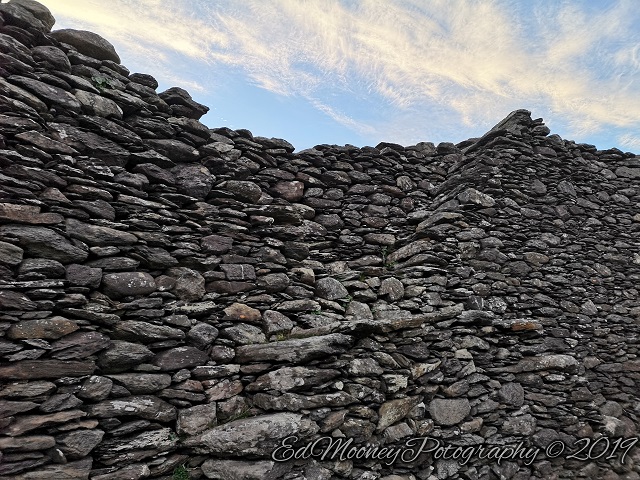 I’m afraid my images really don’t do this site justice, I must invest in a drone for visiting these types of monuments to show how amazing they really look. Best I could do was a panoramic video from inside the fort which you can see HERE. Its generally believed that this would have been a defensive stronghold for a local chieftain. It certainly would have kept him and his clan safe from the wild beasts that once roamed these lands and from and would be attacks by other clans. But there is more to this story, nearby there is strong evidence to suggest that copper mining took place in the surrounding area. Was this the home of these miners? That’s one thing that intrigues me about these places. A lot of our answers are just guess work. It could to be honest served as a place of worship, a trading post, observatory or a defensive outpost. The truth is we just don’t really know.