Posted on October 6, 2015 by edmooneyphotography

As the tide of winter approaches at an unworldly speed, there is an ever increasing sense of magic in the air, which you will only encounter at this time of year. Ok so the dark mornings and evenings can be the cause of much gloom and depression for those of us whom are suffering from a lack of sun light. But that is the nature of the beast living in the northern hemisphere and it’s a trade-off that I for one am more than willing to accept.  Our ancestors celebrated Samhain in its truest form. I want you to forget about everything that you think you know about the modern day festival celebration known as Halloween. This has over the years been high jacked by greedy commercial entities for commercial gain and various neo pagan and Christian groups whom have attached their own dogma to it.

Samhain originated in Ireland and has been celebrated by my ancestors since ancient times. It is the start of the New Year, the final harvest before winter and a time when the thin veil which separates our world from that of the other world begins to fade. This is the foundation of what Samhain is all about. Over the many centuries various traditions have become associated with the festival and these vary from geographical location to family tradition. Migrants from Ireland brought many of these traditions with them and as a result, Halloween became a popular celebration in the US, which was eventually exported as a commercial event much like modern day Christmas thanks in no part to the Coca Cola Corporation. It is from this corruption of the Halloween that the humble turnip became a pumpkin and many other differences.

The most popular cultural practise of Trick or Treat comes from the ancient belief that spirits from the otherworld were able to roam the land of the living at this time of year. Now as a rule this was not a big issue and it would have been an honor to have deceased ancestors and family members return for a visit, but  just like the fact that there are good and bad people, In the spirit world there are good and bad spirits. So to avoid being recognised and/or to frighten away these unwanted visitors is became common practise to disguise ones appearance. Now that covers the dressing up part of the custom. But as for trick or treat, that is a tradition from the Christian beliefs of the medieval period. You may have heard of Hallowmas or All Hallows Eve? Well this is the forerunner of Halloween which we know today. During the middle ages when the Catholic Church was still attempting to stomp out the old beliefs and convert the people, Samhain became “All Hallows Eve,” “All Soul’s Day,” and “All Saints Day”. Children would dress up as saints, angels and perhaps even the odd demon and go door to door begging for food or money in exchange for songs and prayers. This practise was known as  “souling” and the children were called “soulers”. 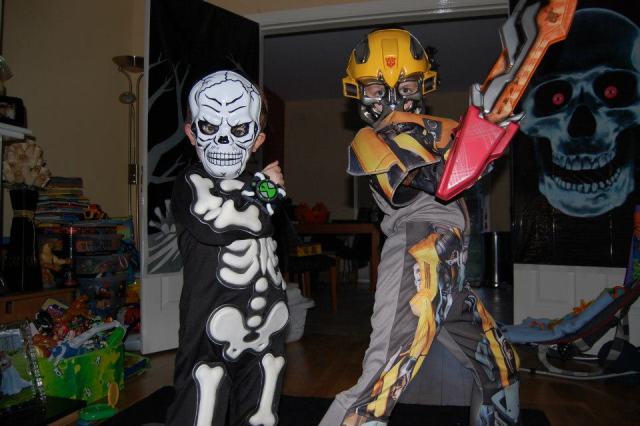 However it was not until the early 1920’s in the US that this tradition was converted into what we now know as Trick or Treating. Which involved children dressed up as all manner of horrific creatures knocking from door to door requesting treats or a trick would be played on you. As was often the case, the trick would not be pleasant so it was wise to provide a treat for these little darlings. Popular tricks these days might involve  your house being covered in TP or eggs being thrown at your windows.  I remember as a kid some of the older teens decided to play a trick on one particulary mean person, which involved filling a paper bag full of Horse manure, setting  the bag alight in the porch and banging on the door before scarpering down the road. Whe  the door was answer the poor victim would naturally stomp on the bag to put out the fire and well………….. I guess you can imagine what happened next.

Im my day, (gosh now I sound old). Halloween was a much simpler process, there were no fancy costumes and sweets were never given out at the door.  Most costumes then consisted of a black rubbish back put over the child and soot from the fire rubbed on the face. We all looked the same but, when asked you could be a witch, a goblin, a ghost or a vampire. We knew no different back then  and as we knocked on each door, we would chorus ‘Help the Halloween Party’. As I said there was no sweets or candy back then, all you got were nuts, apples, oranges or if you were lucky a handful of grapes.

This will be my third year to feature Samhain related posts on this blog and Im hoping that it will be the best year to date. A few Days ago I launched the Spooktacular as part of the Weekly ‘Capturing History Challenge’, which will go out on the morning of Samhain /Halloween. If you’re interested in getting involved then check out the following link. SPOOKTACULAR 2015 . So continuing on with the annual tradition, through the remainder of October I will be in addition to my regular Ruinhunting adventures sharing some old and new posts connected to the Samhain festival. From old traditions to spooky encounters and places. I really hope that you enjoy it.

Photographer, Blogger, Ruinhunter, with an unhealthy obsession for history, mythology and the arcane.
View all posts by edmooneyphotography →
This entry was posted in Samhain and tagged Halloween, History, Ireland, Kildare, Nikon, photographer, Photography, Samhain, Spooktacular, Tradition, Travel. Bookmark the permalink.