Posted on September 5, 2013 by edmooneyphotography

Overlooking the town of Edenderry, Blundell Castle is located on a hill from which the town gets its name; Eadon Doire, meaning brow or hill-top of the oak trees. Today, the oak trees are long since gone, but the ruins of the castle remain The ancient territory of UiFailghe was give to Robert De Bermingham by the Norman invader Richard de Clare, 2nd Earl of Pembroke. These lands were ruled by the O’ Connor’s at the time of the arrival of the Norman De Bermingham’s. 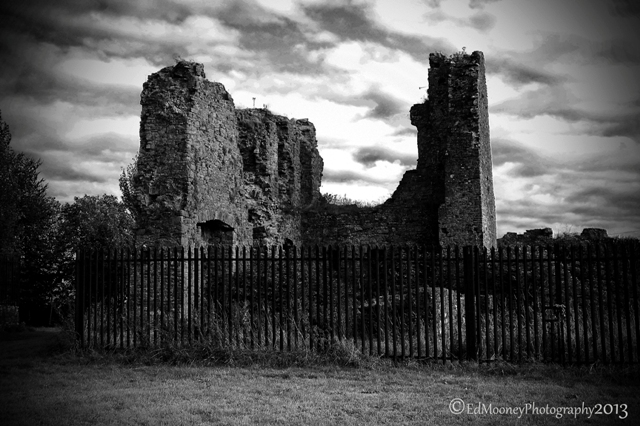 The castle now in ruins lies in the middle of a small parkland surrounded by a council housing estate. The remains of the castle are overshadowed by the neighbouring water tower which supplies the town of Edenderry with water. There are many numerous Bermingham monuments dotted around Ireland particularly in the Kildare and Offaly area.Sadly most of these are now in a very ruinous state. There are a total of five castles and one monastery still in existence alond the Kildare/Offaly border. Carbury Castle, Grange Castle and Carrick Castles are in County Kildare, while Blundell Castle, Kinnefad Castle, and Monasterois Monastery are in County Offaly. I have previously posted about Carbury & Carrick, you can check these out by clicking the links above. The three castles located on three hills which over looked  the edge of the Bog of Allen, can be seen from each other, which would have  added an extra sense of security to its inhabitants. 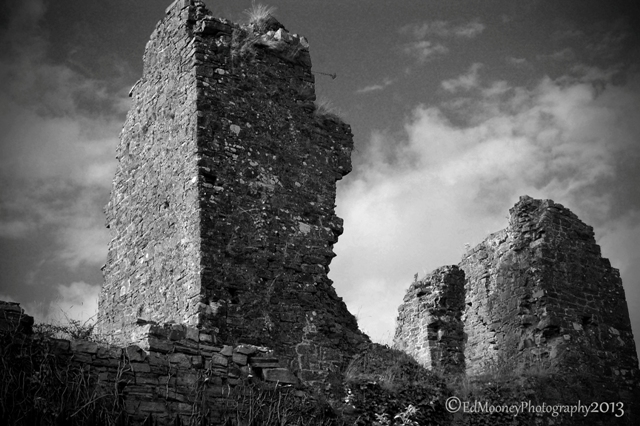 The Castle originally  dates from the 13th Century when it was constructed  by the De Berminghams’ much later a rectangular tower house consisting of three storeys was built. Today only the East and South walls remain standing exposing some of the innards. On arrival I was disappointed as the Ruin has been fenced off. In 2009 as a result of damage caused by anti- social behaviour the local council began conservation work on Blundell castle. Now what they actually did to the structure I cannot tell but they did erect a rather nasty looking steel fence around the site which would have hampered my exploration, but for the fact that someone had removed a bar in the fence which allowed me to gain access and have a good look around.From the existing remains of the interior there is evidence of two fireplaces, one on ground level in the East wall and the other in the South wall on the next level. I could not see traces of any steps or stairs but these may have been  attached to one of the missing walls. To the  rear of the ruins you can see three narrow windows in the South wall. 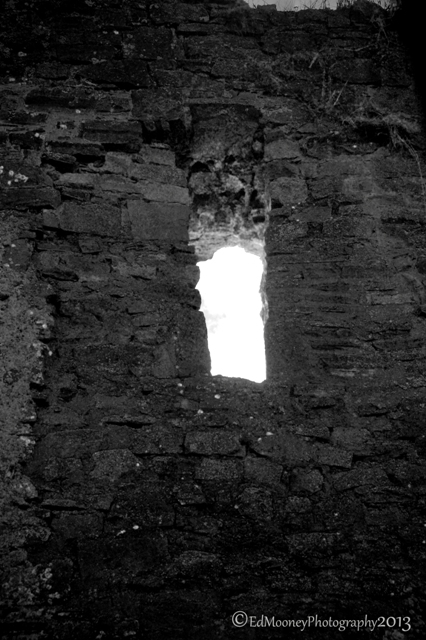 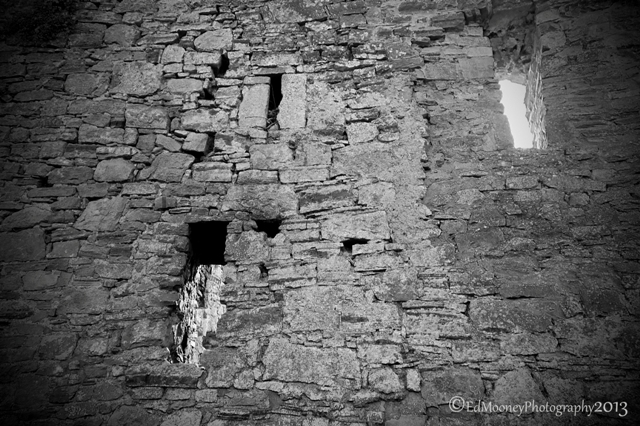 The annals record that John De Gray, Lord Lieutenant of Ireland, attacked the castle in 1427, as a result of an alliance between the De Bermingham’s  and the O’Connor’s.  The castle it is said was devastated on this occasion, and perhaps it is more likely to assume that the tower house, the ruins of which remain, was added at this time. In the 16th century Blundell changed hands and was held by the Colley family whose name gave Edenderry it’s former title, Coolestown. Sir George Colley defended the castle from attack by the O’Neill clan in 1599 during the Nine Years’ War. By 1659 it was under new ownership by George Blundell, whose family held the said ownership until the 18th Century. The Blundells came to national attention in 1674 when the three sons of Sarah and George, namely Francis, William and Winword were accused of murdering Thomas Preston the son of the Catholic peer Lord Tara. They were subsequently acquitted by Charles II. 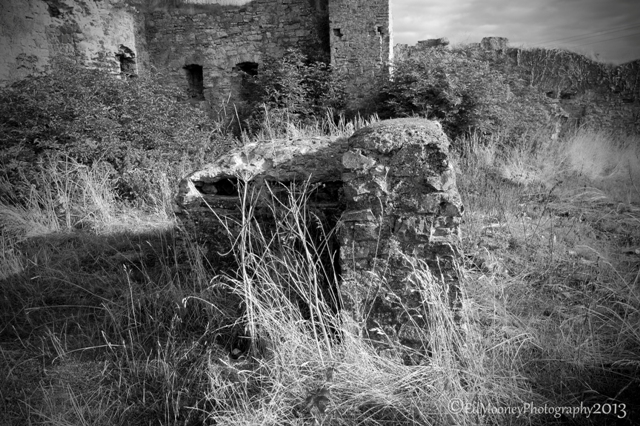 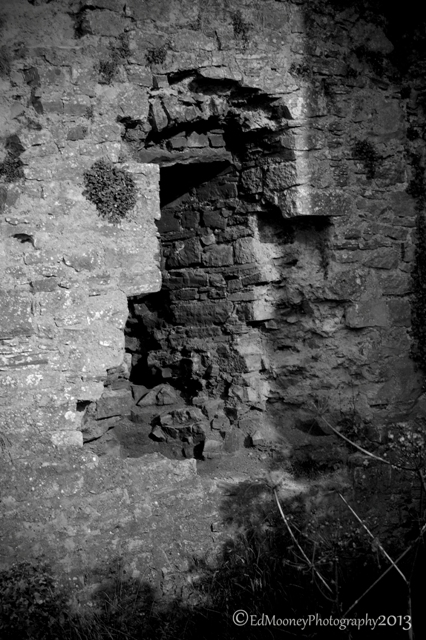 The war of the ‘Two Kings’ in 1690-91 brought about the eventual downfall of Blundell Castle. The Blundells had sided with the Williamite cause and having destroyed nearby Ballybrittan Castle The Castle was attacked once again in May 1691 by the forces of James II  under the command of Lt. Col. O’Connor whom destroyed both Blundell castle and the town of Edenderry on 13 February 1691, it has been derelict ever since. . In local myth passed on through generations, the castle is said to be haunted with the ghost of Sarah, Lady Blundell. 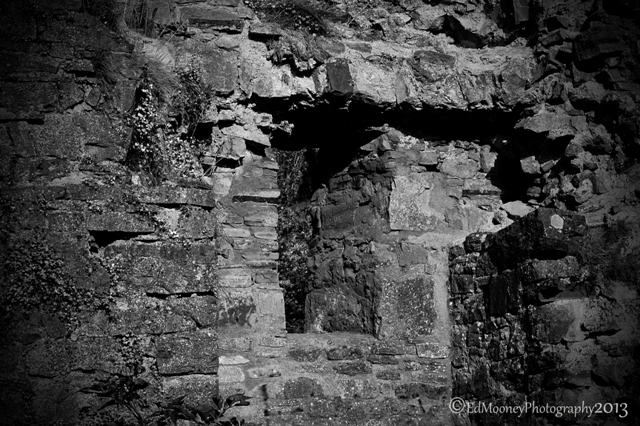 There is evidence of a tunnel not far from the Castle ruins and local legend says  that it is part of a long tunnel built supposedly between Blundell and the another De Bermingham Castle at Carbury, a distance of about five miles. An interesting local story tells that during the 19th century Edenderry was governed by a Lord Downshire and it has been said that his wife used this tunnel to meet her lover at Carbury. It seems however that this affair was discovered by Downshire and consequently he murdered his wife. If the tunneldoes  actuallyexist and connect  both castles it may have been installed by the Berminghams as a means of communication during times of conflict with the native Gaelic clans. 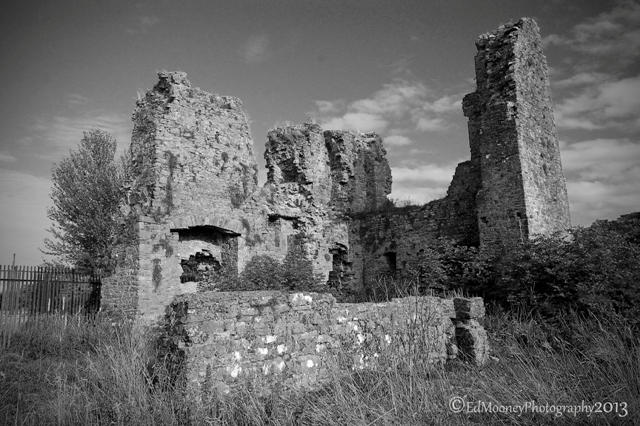