Posted on May 3, 2013 by edmooneyphotography

I found this tower in the middle of Clondalkin, but its history remains quite elusive. With Clondalkin being famous for its monastic settlement there is very little recorded on this find. Known locally as Tully’s Castle and named after a previous owner this is all that remains of the 16th century tower house. As Clondalkin rests on the outskirts of Dublin it was possibly one of a number of such fortifications built around the town.

The “Journal of the Royal Society of Antiquaries of Ireland 1899” gives the following information: The name “Castle of Clondalkin”’ is applied to Tully’s Castle in a number of late eighteenth and early nineteenth century leases, which deal with a place called “The Sheepus”. The Castle was occupied for many years by a family named Tully. […] Since 1761 there has been no great change in [its]appearance. The Sheepus in these leases is referred to as … “ nearly adjoining the Castle of Clondalkin”. 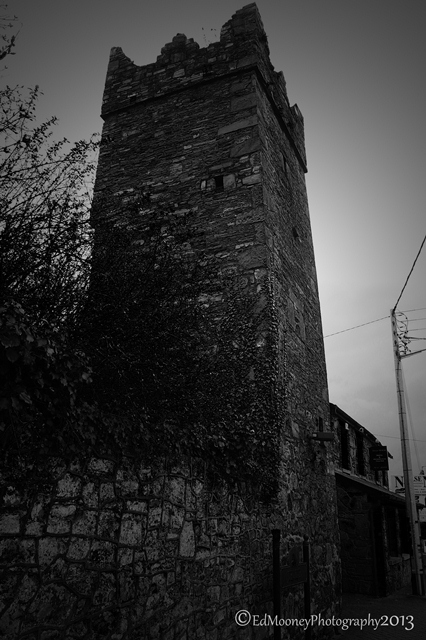 The Borough of Clondalkin was ruled by a Corporation and Bailiff. In 1276 Robert Beg held this position and one John De St. Peter came from the City with five horsemen and fifteen infantry to help him resist attack. The increase in trade in the area also led to the appointment of a Weighmaster. The Clondalkin castles were constructed during this period as outposts of the Pale. One was at Moyle Park while the other two guarded the entrance to the village. Only Tully’s Castle remains today. The tower now resides as part of a front wall to a private property.

Photographer, Blogger, Ruinhunter, with an unhealthy obsession for history, mythology and the arcane.
View all posts by edmooneyphotography →
This entry was posted in Castles, Diary of a Ruinhunter, Historical, Photography, Places of Interest and tagged 16th Century, Castle, Clondalkin, Dublin, Fortification, Ireland, Pale, Tower, Tully. Bookmark the permalink.