Posted on October 13, 2015 by edmooneyphotography 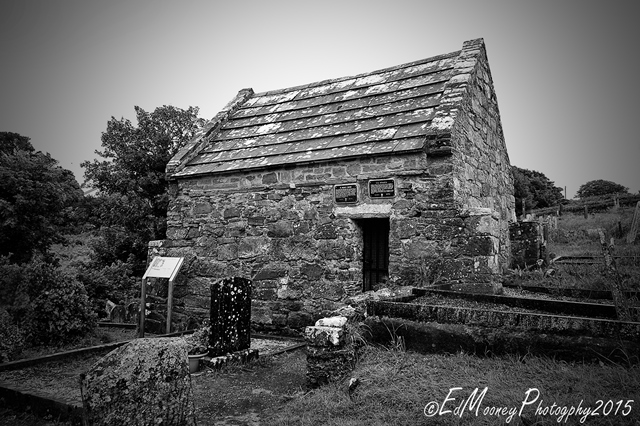 Today we are heading back down to the monastic settlement in Ardmore, Co. Waterford, where I came across two Ogham Stones recently.  St. Declan founded a monastery at Ardmore or Aird Mhór in Gaelic, meaning “Great Height”. This was said to be prior to the arrival of St. Patrick in Ireland, although there is some dispute of the dates which is typical when it comes to much of Irelands pre medieval history. The dates commonly agreed for Declan’s life are between 350 and 450 A.D. Just around the back of the Cathedral there is a small little building known as St. Declan’s Oratory or ‘The Beannachan’ as it is also known. This is believed to have been built on the final resting place of the site of the early Christian Saint. Despite the torrential downpour, Ardmore was still a nice place to explore. Despite its slanted tiled roof, it reminded me so much of The Priest House at Glendalough. And I quickly made my way for the door in the hope of finding some shelter. Sadly this was not to be as the enterance was block by one of the Ruinhunters nemesis, ‘The Iron Gate’

St. Declan was born Declán mac Eircc, a prince of the Deisi Clan in Munster during the 5th century and is said to have been baptised by St. Colman. After some years studying under the guidance of a sage known as Dioma, Declan went to Rome where he was ordained a Bishop by the Pope. One little legend associated with Declan tells of a strange Bell which he used to summon a vessel to return him to Ireland. The legend states that the bell was placed in a rock and when Declan prayed the rock floated out to sea. Declan followed it and he eventually landed on the shores of Ardmore, where he established his monastery. With the flagstone which is said to have once marked Declan’s grave now gone, a hollow in the south-east corner is believed to be the site of his grave. The Oratory itself dates from around the 8th century and the upper walls show signs of repair work from a later date. There is no trace of the original roof, but it is said that the bishop of Waterford, Thomas Mills had i t re-roofed with slates in 1716.

Dont forget to start sending in submissions for the SPOOKTACULAR CHALLENGE on October 31st.