Posted on October 27, 2015 by edmooneyphotography 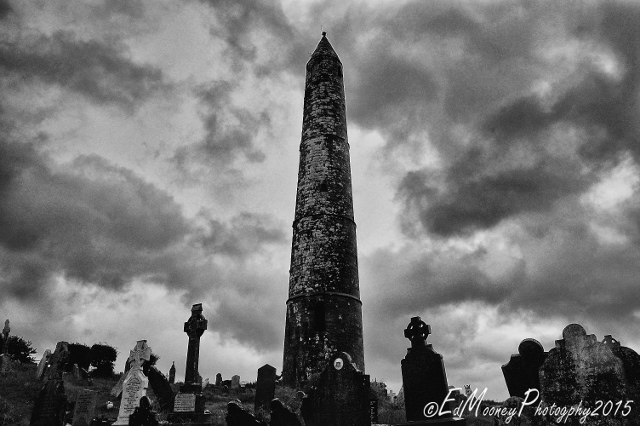 Today I am going to take a break from the Samhain theme and get back to some recent Ruin hunting activities. In the center of the old monastic site founded by St. Declan in Ardmore, Waterford rests a stunning Round Tower. Despite the torrential downpour during my visit, I did manage to get a couple of decent shots, so it was worth the soaking in my mind. Also within the monastic complex there is an Oratory, believed to have been built on the site of St. Declan’s final resting place, A Cathedral which I hope to share with you next week, and within this there are two Ogham stones which are rather fascinating. It is said that on a clear day there are stunning views from Ardmore looking out over the nearby bay.

The tower itself is in great condition, complete with conical cap. Now it is not unusual for these towers to be locked up. The only one I have managed to access is the Round Tower in Kildare town, with its unusual battlements instead of a conical cap. And Ardmore was no exception to the norm, but it is still great to see these structures standing after more than 800 years. How many modern day buildings do you think will last that long? Built sometime in the 12th century the Tower was not in use during Declan’s time at Ardmore, but it is believed to be much older than the adjacent Cathedral and was most likely associated with an earlier church which once stood here. Chances are that the Cathedral was built atop the older church. 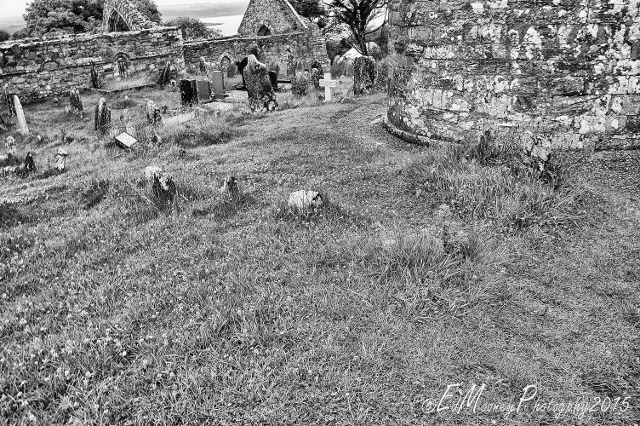 Built on a base of flat rocks the tower climbs to a height of approx. 26 meters. With a plinth of cut stone, and four floors, the upper three floors are externally recessed by a string of course. This gives the tower a needle like appearance from a distance. The tower is composed of very even sandstone blocks and dressed to the curve. The only entrance to the tower is a single round arched doorway decorated by a continuous roll-moulding., which is positioned about four meters above ground level. Now we were always told that the reason for this was to prevent marauding invaders from pillaging the monasteries, and whilst there may be some truth to this fact, I seriously doubt that this the main reason for its unusual positioning. In fact if you look at the construction of these towers, placing a doorway on the ground level would have seriously weakened the structure. The fact that so many of these fine Towers are still standing would attest to this fact. The Tower has three rather small lights and has four windows, one facing each of the cardinal points. Internally, there is said to be up to sixteen corbels to support the wooden floors at each level. Five of these are said to have been carved with grotesque faces. 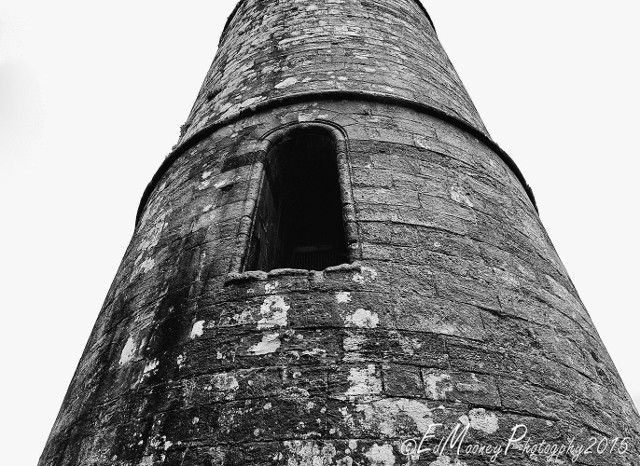 The first known account of the tower dates from 1642 when it and the nearby Castle, of which there is no trace left to be found, was occupied by Gaelic forces during a battle with the English. In the 1840’s the local landowner, a Mr. Odell and his amateur archaeologist brother carried out some conservation work on the tower, and it was at this time that floors and ladders were fitted. In 1841 the base was excavated and two skeletons were found, which might suggest that the tower may have been built on top of an earlier burial ground. During the 1860’s the capstone was said to have been damaged by musket fire and had to be replaced. The original stone was said to have been placed inside the doorway to the Cathedral, but I could find no sign of it during my visit. Perhaps it was recycled during more recent times? 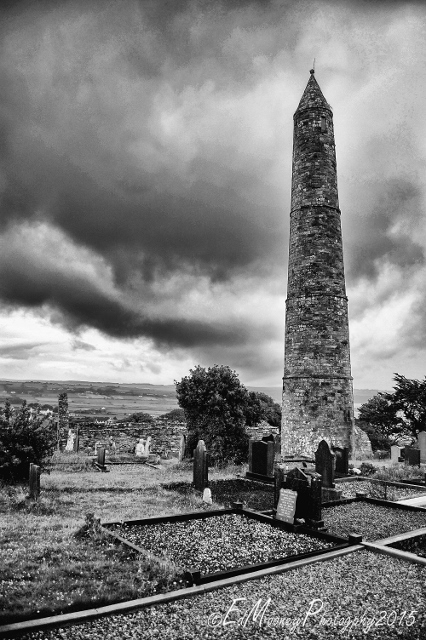 Due to the fantastic response to the Spooktacular Challenge, I have decided to put myself under pressure and extend the deadline for submissions untill midnight on Thursday 29th. I have already started compiling the challenge and its looking great so far. If you are still interested in particiating, then get your entries in soon. You can find out all about the challenge HERE and email all entries to edmooneyphotography@gmail.com. The Weekly Capturiing History Challenge will resume tomorrow morning, so check it out.

42 Responses to Ardmore Round Tower